Readers Question: how to revise for a possible exam question like: discuss the likely effectiveness of ‘expansionary fiscal and monetary policies as means of closing the output gap’

Firstly write down the question on a blank piece of paper. Then try and revise in three parts.

Expansionary monetary policy could involve cutting interest rates. If the Bank of England cut interest rates, this should stimulate aggregate demand. Firstly, lower interest rates reduce the cost of borrowing and therefore encourage consumers to spend on credit. Lower borrowing costs will also encourage firms to invest because it is cheaper to finance investment. Secondly lower interest rates will reduce the amount householders have to spend on mortgage interest payments and therefore they will have more disposable income; this should increase consumer spending. Overall, with higher C and I, we should see an increase in AD.

The government could decide to borrow from the private sector and use this to spend on capital investment, such as building new roads and railways. This increase in government spending will increase AD and have a similar effect in increasing GDP. Alternatively, the government could cut the rate of VAT, this lower tax will give consumers greater spending power and should hopefully increase consumption; this should also increase AD, leading to great real GDP and reduce the output gap. There may also be a multiplier effect with the initial investment causing a bigger final increase in real GDP.

For evaluation we need to discuss

Evaluation for macroeconomics could involve several factors, such as:

Using these evaluation points for this question 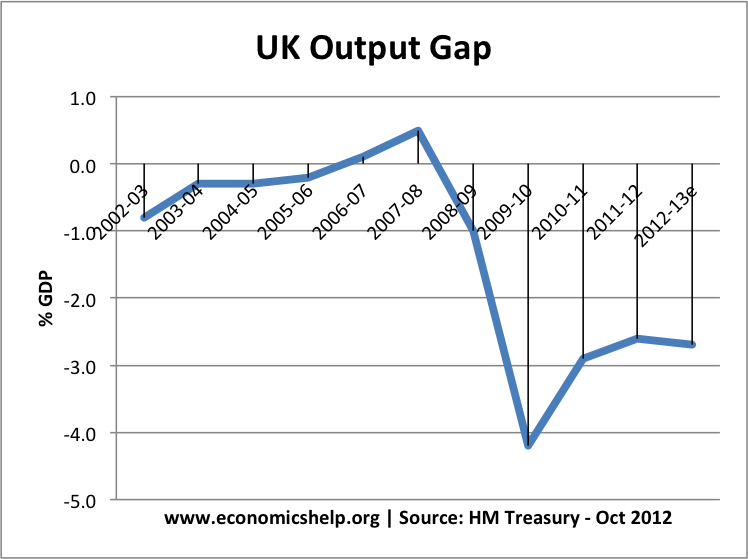 In theory, expansionary fiscal and monetary policy should be able to reduce the output gap. if combined together, we would expect to see higher consumption and higher investment, leading to increased AD. However, the effectiveness of fiscal and monetary policy does depend on several factors. For example, from 2008, traditional monetary policy was ineffective in closing the output gap. Banks didn’t pass on lower interest rates. Due to large losses, banks were reluctant to lend and firms couldn’t borrow, even though base rates were low. However, if policymakers had been more determined to close the output gap then they maybe we would have greater success. If monetary policy is insufficient, then using expansionary fiscal policy would have injected more spending into the economy and the higher aggregate demand. With a large output gap, savings rise and so there is usually strong demand to buy government bonds. In the case of the UK, we could borrow at low long term interest rates and use these inactive resources and stimulate economic activity.

The revision is to test whether

2. You know how to explain and draw correct diagrams

4. Practise brining all these together, making sure you answer the question.