Definition of Dependency Ratio: The dependency ratio measures the % of dependent people (not of working age) / number of people of working age (economically active)

For example, many people aged 16-65 are effectively economically inactive, including:

Note: The unemployed are still counted as economically active – if they are actively seeking work. However, if they have given up looking for work, then they are counted as inactive.

The definition of economically active is not always clear-cut (e.g. a part-time worker over 65 is something of a grey area.)

Importance of the Dependency Ratio

The economically inactive under 16 and over 65 also tend to be bigger recipients of government spending e.g. education, pensions and healthcare.

Dependency Ratio in the US 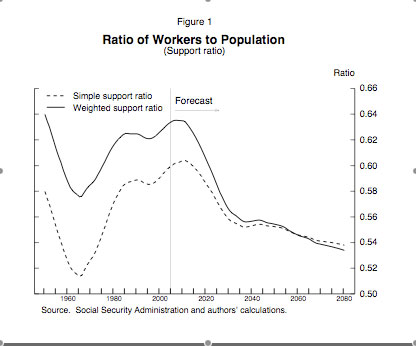 Graph showing forecast inverse dependency ratio in the US

This US method is basically inverting the picture. WIth more old people, the ratio of workers to population falls.

This takes into account that people over 65, tend to require higher government spending than children under 16. (e.g. old people require more health care spending). Therefore, the weighted support ratio gives a higher weighting to dependents over 65.

As dependency ratios rise, some solutions include: