The 1929 stock market crash was a result of an unsustainable boom in share prices in the preceding years. The boom in share prices was caused by the irrational exuberance of investors, buying shares on the margin, and over-confidence in the sustainability of economic growth. Some economists argue the boom was also facilitated by ‘loose money’ with US interest rates kept low in the mid-1920s.

These are some of the most significant economic factors behind the stock market crash of 1929.

In the 1920s, there was a rapid growth in bank credit and loans in the US. Encouraged by the strength of the economy, people felt the stock market was a one-way bet. Some consumers borrowed to buy shares. Firms took out more loans for expansion. Because people became highly indebted, it meant they became more susceptible to a change in confidence. When that change of confidence came in 1929, those who had borrowed were particularly exposed and joined the rush to sell shares and try and redeem their debts.

2. Buying on the margin

Related to buying on credit was the practice of buying shares on the margin. This meant you only had to pay 10 or 20% of the value of the shares; it meant you were borrowing 80-90% of the value of the shares. This enabled more money to be put into shares, increasing their value. It is said there were many ‘margin millionaire’ investors. They had made huge profits by buying on the margin and watching share prices rise. But, it left investors very exposed when prices fell. These margin millionaires got wiped out when the stock market fall came. It also affected those banks and investors who had lent money to those buying on the margin.

A lot of the stock market crash can be blamed on over-exuberance and false expectations. In the years leading up to 1929, the stock market offered the potential for making huge gains in wealth. It was the new gold rush. People bought shares with the expectations of making more money. As share prices rose, people started to borrow money to invest in the stock market. The market got caught up in a speculative bubble. – Shares kept rising, and people felt they would continue to do so. The problem was that stock prices became divorced from the real potential earnings of the share prices. Prices were not being driven by economic fundamentals but the optimism/exuberance of investors. The average earning per share rose by 400% between 1923 and 1929. Those who questioned the value of shares were often labelled doom-mongers. This was not the first investment bubble, nor was it the last. Most recently we saw a similar phenomenon in the dot com bubble.

In March 1929, the stock market saw its first major reverse, but this mini-panic was overcome leading to a strong rebound in the summer of 1929. By October 1929, shares were grossly overvalued. When some companies posted disappointing results on October 24 (Black Thursday), some investors started to feel this would be a good time to cash in on their profits; share prices began to fall and panic selling caused prices to fall sharply. Financiers, such as JP Morgan tried to restore confidence by buying shares to prop up prices. But, this failed to alter the rapid change in market sentiment.  On October 29 (Black Tuesday) share prices fell by $40 billion in a single day. By 1930 the value of shares had fallen by 90%. The bull market had been replaced by a bear market.

4. A mismatch between production and consumption

The 1920s saw great strides in production techniques, especially in industries like automobiles. The production line enabled economies of scale and great increases in production. However, the demand for buying expensive cars and consumer goods were struggling to keep up. Therefore, towards the end of the 1920s, many firms were struggling to sell all their production. This caused some of the disappointing profit results which precipitated falls in share prices. 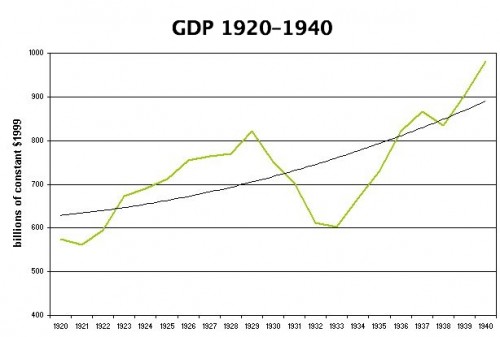 Rapid growth in Real GDP during the 1920s, couldn’t be maintained

In 1929, there were already warning signs from the economy with falling car sales, lower steel production and a slowdown in housing construction. However, despite these warning signs, people still kept buying shares.

Even before 1929, the American agricultural sector was struggling to maintain profitability. Many small farmers were driven out of business because they could not compete in the new economic climate. Better technology was increasing supply, but demand for food was not increasing at the same rate. Therefore, prices fell, and farmers incomes dropped. There was occupational and geographical immobilities in this sector, and it was difficult for unemployed farmers to get jobs elsewhere in the economy.

6. Weaknesses in the banking system

Before the Great Depression, the American banking system was characterised by having many small to medium sized firms. America had over 30,000 banks. The effect of this was that they were prone to going bankrupt if there was a run on deposits. In particular, many banks in rural areas went bankrupt due to the agricultural recession. This had a negative impact on the rest of the financial industry. Between 1923 and 1930, 5,000 banks collapsed.

Note: If the question was – What caused the Great Depression? The answer would be slightly different. This is because some believe the Stock market crash was only partly to blame for the Great Depression (although it was a significant factor in precipitating it.)