In 1979, Mrs Thatcher was elected Prime Minister of the UK. At the time, the UK was experiencing double-digit inflation, trades unions were powerful and there were signs British industry was becoming increasingly uncompetitive.

Mrs Thatcher introduced revolutionary economic policies which had a deep impact on the UK economy. They were characterised by a belief in free-markets, an effort to reduce state intervention in the economy, reduce the power of trade unions and tackle inflation. Her main policies included

In the early years of the 1980s, Mrs Thatcher embarked on a policy of Monetarism. This involved trying to target the money supply to reduce inflation. It involved:

Unemployment reached its highest rate since the 1930s.

In 1981, 365 economists wrote a letter to the Times arguing the monetarist policies were unnecessarily harming economic output, causing unemployment to be higher than necessary and output lower. In particular, the link between the money supply and inflation was much weaker than predicted by monetarist theory. Despite a deep recession, the money supply grew faster than expected. To meet the money supply targets, required persistent tightening.

The link between money supply and inflation proved to be unreliable and by 1984, money supply targets had effectively been dropped.

A key element of Thatcher economics was new market-based supply-side policies. This involved:

As a result of the more regressive tax system – plus a rise in structural unemployment – there was a marked rise in inequality in the 1980s. 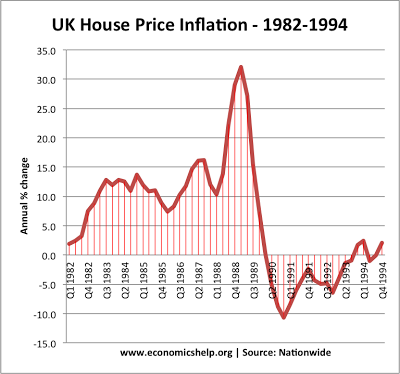 Due to the new supply-side policies, the Conservatives felt they had presided over an ‘economic miracle’ which meant the economy could now grow faster without inflation. In the late 1980s, Nigel Lawson cut interest rates and taxes and allowed an economic boom. In the late 1980s, house prices rose creating a positive wealth effect. There was also a rise in consumer spending. This led to economic growth of over 5% a year. However, it also caused a rise in inflation to over 10%.

To reduce this inflation, another recession was caused. 1991-92 Recession

It is a good question – how much was Mrs Thatcher responsible for the Lawson boom and the decision to enter the exchange rate mechanism (ERM) in Oct 1990. Nigel Lawson’s policy of unofficially shadowing the D-Mark was not one of Thatcher’s ideas. This was one reason for monetary policy being too loose in the late 1980s.

Thatcher was never keen on the European ERM and only reluctantly agree to join in October 1990 (she was forced from office a month later.