Readers Question: Why do the Fed choose to prefer the PCE that leads to a lower inflation rate than the CPI?

This refers to US inflation rates, UK readers may get more from RPI vs CPI

Difference Between PCE Deflation and CPI

As a result, there are numerous items included in the PCE deflator which are completely out of scope of the CPI. Some examples include military clothing, final expenditures by museums and libraries, and food furnished and consumed on farms.

An example of differences in weights. In 1996, the PCE category “Physicians” accounted for about 3.77% of the total spending that falls within the scope of the PCE Deflator. In the same year, “Physicians Services” spending accounted for a budget share of 1.89% of the CPI market basket.

A weighting is how important the good is to the overall price level. In this case a rise in price of ‘physicians’ would lead to a bigger effect on the PCE index than the CPI index. 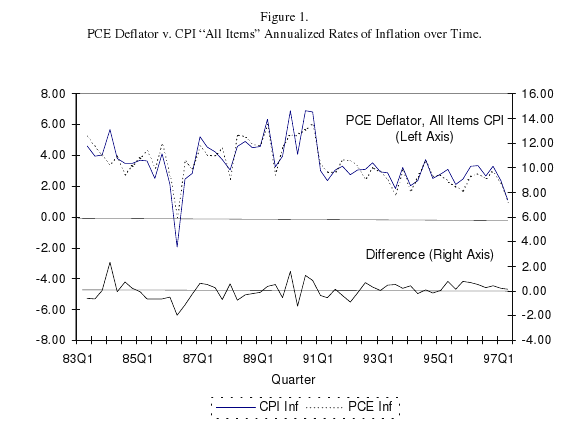 This suggests the differences are relatively small but can vary depending on different time periods. There are periods when the PCE is higher than CPI and vice versa.

To answer your question, I’m not entirely sure why the CPI is chosen, you could make a reasonable case to use either measure.

A more interesting contrast is between CPI and Core CPI.

1 thought on “Difference between CPI and PCE Inflation”