For many years the Chinese Yuan was tied to the dollar, however in July 2005 the yuan was finally allowed to break away from the dollar. However, unlike most other currencies, the Chinese government still try to influence the level of the Yuan. They have tried to keep the value of the Yuan low, to enable Chinese exports to remain competitive. Chinese record growth is due mainly to its exporting sector. The Chinese government fear that if the Yuan is allowed to become too strong, growth will slow causing unemployment to increase.

As a consequence of the undervalued Yuan, China has one of the world’s biggest current account surpluses (10% of GDP) (surplus = value of exports > value of imports)

As of November 9th, the Yuan appreciated to 7.4108 versus the dollar

The Chinese Yuan has appreciated by a small amount since 2005 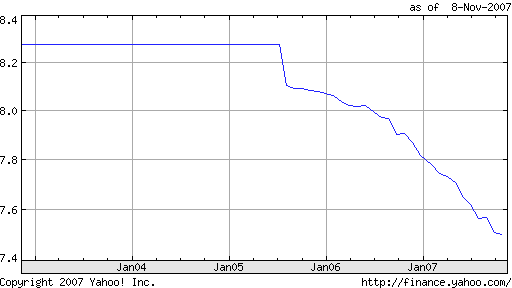 China is being put under  renewed pressure to allow the Yuan to appreciate. US trade officials are particularly keen to see the Yuan appreciate so that the US can help to reduce its current account deficit