Readers Question: How much bargaining power do workers have?

Bargaining Power is the ability for firms or workers to get what they want. An example of bargaining power is related to the power of trades unions.

Classical economic theory assumes wages will be determined by free markets and the interaction of supply and demand. This theory assumes workers are wage takers. However,  if workers are organised into trades unions, they can have significant bargaining power in pushing wages above the equilibrium.

Also, another scenario in the real world occurs when firms often have a degree of monopsony power which enables them to set low wages and pay workers substantially less than the competitive wage. 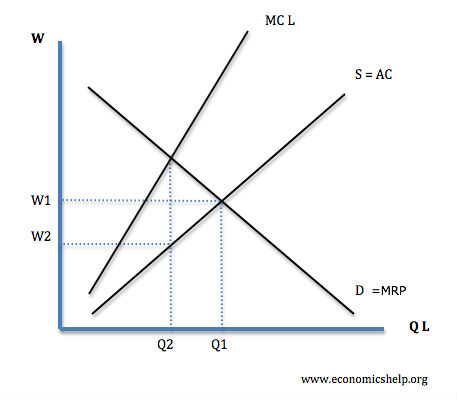 Monopsonies can pay a wage of W2.

Firms can gain monopsony power because:

Who has more bargaining power firms or workers?

Apart from rare cases of real union power, I would say generally firms have more bargaining power in setting wages.  In all the jobs I’ve worked at, I have never been involved in determining wages. The firm set wages and conditions, and you accept it or not. I think for the majority of workers, it is like this. True, workers can move to other jobs, but there are real costs and difficulties in switching jobs.

However, most firms are conscious of the need to attract good workers, so wages can often be pushed up by market forces.

Clearly this process depends on the type of job. With skilled jobs creating a greater incentive to push up wages.

Another factor is that workers may struggle to increase wages, but they have more success in preventing wage cuts. For example, since the credit crunch, wages have not fallen – despite a rise in unemployment. There is considerable evidence that wages are sticky downwards. This may be due to the fact firms are reluctant to cut nominal wages because of the adverse impact on labour productivity. 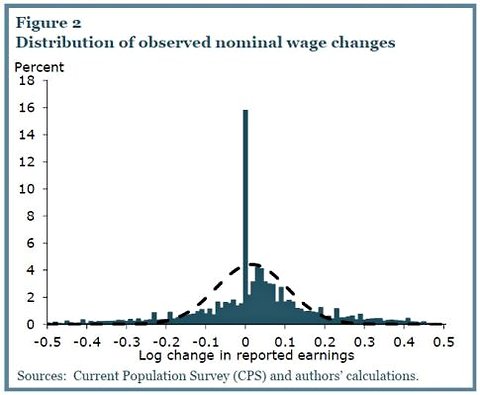 Wage Rigidity in US Lawyers

The distribution of salaries for lawyers in US is biased around two peaks at $40,000 and $160,000. That $160,000 salary has stayed constant since 2007 – suggesting there is significant wage rigidity in lawyer fees.

Law firms have kept this high wage because