One feature of the labour market in the past 10 years has been the rise of zero-hour contracts. This is a contract where the employer is not obliged to employ a worker for any number of fixed hours. It means that the contract is highly flexible in terms of hours worked. This is obviously advantageous for an employer who has fluctuating demand and who seeks to cut the wage bill in quiet periods. 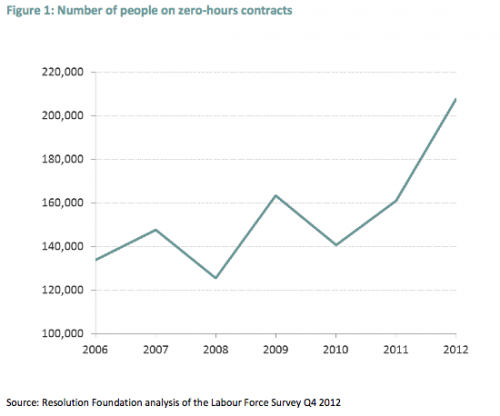 Flexible working hours can have benefits for some types of workers, e.g. students or second income earners who like the flexibility of doing different amounts of hours from week to week. Some also credit flexible working practises for limiting the rise in UK unemployment during the recent recession.

However, for many workers, zero hour contracts have greatly increased the uncertainty of work. It means, in quiet periods, many workers can be left with insufficient income to meet monthly bills. This increased labour market flexibility, thus comes at a cost of increased uncertainty and lower-income.

A report by the resolution foundation investigated the extent and impact of this growth in zero hour contracts. Amongst different factors, they found: