The UK grocery market has become increasingly competitive in the past few years. It is a good example of an oligopoly becoming more competitive. Certainly, the growing strength of discount giants like Aldi and Lidl have really shaken up the market and diluted the cosy oligopoly previous enjoyed by the likes of Tesco and Sainsbury. To further add interest, Pound shops are also gaining market share and nibbling away at the margins of the big supermarkets. For consumers, it is largely good news with lower prices, lower profit margins and a raft of incentives from supermarkets trying to hold onto market share.

The big three – in particular, Tesco and Sainsburys are suddenly having to pull a halt to ambitious expansion plans and in Tesco’s case have been left red-faced by profits falling short of profit forecasts.

Why are Supermarkets becoming more competitive?

The supermarket industry is fairly contestable. There are few limits to opening a new superstore. Also, the shift to smaller, local convenience stores has made it even easier to set up new local supermarkets – rather than big, out of town supermarkets.

In the case of Lidl and Aldi, it is very successful European supermarkets bringing their model to the UK. They both have a strong track record of taking on bigger, higher margin supermarkets and attracting customers from a wide range of social backgrounds – attracted by very low-cost goods. In 2014, Aldi has achieved its highest ever growth of 35.3%, increasing its market share to 4.6%. It is planning to open another 60 stores in 2015

The past few years have been particularly tough for the hard-pressed British consumer. In the past few years, inflation has consistently been higher than nominal wage growth – causing the most persistent fall in real incomes since before the war. In such straitened times, it is unsurprising that consumers have become more sensitive to price, seeking out bargains in Pound shops and budget, no-nonsense supermarkets like Lidl. The great recession is not a good time for supermarkets like Sainsbury and Tesco who have relied on a higher price markup.

Often supermarket price wars are carefully selective, but this time the price wars really do appear to be more sustained. The price of a basket of goods is the same as last year.

Asda’s chief merchandising officer, Barry Williams, responding to shock fall in sales, talked about the nature of the industry. Saying he had never seen as many money-off vouchers in 25 years, likening several of Morrisons’ promotions to ‘quantitative easing’. (BBC report) 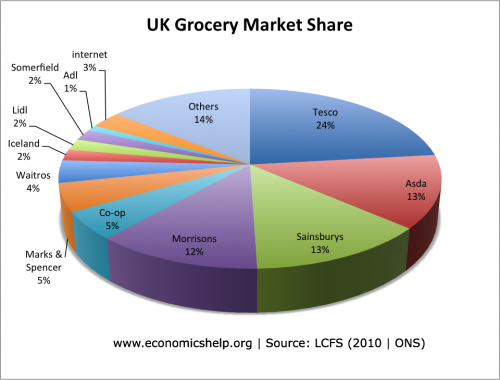 This graph from ONS data uses slightly different definitions of a supermarket.

5 thoughts on “The battle for market share in UK supermarkets”