Readers Question: In the U.S. I have noticed that most restaurants and fast food places have window signs advertising for workers. Would these minimum wage workers, as a collective, be considered a monopsony or a monopoly?

To answer your question, these minimum wage workers would be considered neither a monopoly or monopsony. The fact that unemployment is very low, but wages are not rising, suggests it is the firms who have a degree of monopsony power.

If the minimum wage workers were able to organise and form a trade union, then they may be able to bargain for higher wages – and this would give them a degree of market power (even monopoly power). But, in the real world, there is little evidence to suggest low-paid, low-skilled have any degree of market power, and they are essentially wage takers (they have to accept the market wage).

It is an interesting situation. In the US, unemployment is low (4% June 2018). Vacancies of low-skilled work (especially in service) sector are high.

According to BLS, Job openings reached a series high of 7.1 million on the last business day of August 2018. (link)

Some firms are talking of a labour shortage – yet, there is little evidence of any wage inflation (yet). Many jobs are still advertised at the minimum wage (which in the US is  low as a percentage of mean wages)

The US Minimum wage is relatively low compared to international comparisons 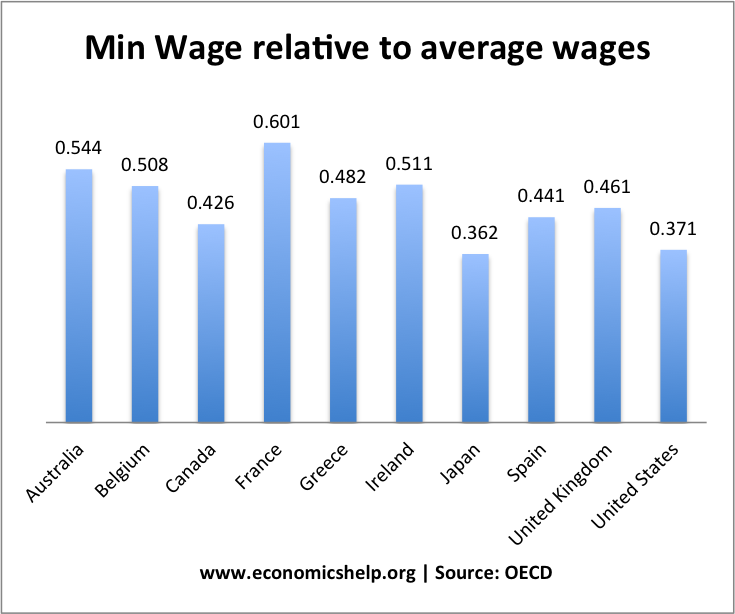 If labour markets are competitive, then this situation of falling unemployment and rising vacancies would tend to put upward pressure on wages. To attract workers to fill vacancies fast-food restaurants have an incentive to increase wages in order to fill vacancies.

This diagram suggests that if there is a labour shortage of Q2-Q1, then wages will be pushed upwards.

Why then are wages not rising during periods of labour shortage?

Workers in the service sector have little chance to organise to form trades unions. Firms face little direct pressure to raise wages. A firm with monopsony power doesn’t want to raise wages to attract new workers because that would mean increasing wages for all workers. The marginal cost of employing an extra worker is higher than the average cost.

A monopsony maximises profits at a wage of W2 and employing Q2. Increasing the wage rate to attract more workers, leads to a bigger increase in marginal cost.

Therefore, because the marginal cost is high, firms would rather leave vacancies unfulfilled for longer than respond by putting up wages.

WWhilefirms have market power in employing workers. Fast food restaurants are operating in a competitive environment. In a city, there are numerous alternatives of where to buy. Rising wages, would lead to lower profits and/or higher prices. But, the fast food industry is price sensitive. If firms pass wages increases onto consumers in the form of higher prices, they may see a significant fall in demand because demand is price elastic.

Wage increases around the corner?

If the US economy keeps growing and creating jobs, perhaps it will trigger a rise in wages and even fast food restaurants may find they have to increases wages above the minimum wage rate. This could trigger inflationary pressures and further interest rate rises.