Trade unions provide an organisation for workers to have joint representation with their employers. Trade unions have several functions:

In a competitive labour market, wages were W1. If a trade union successfully bargains for a higher wage of W2, then employment falls to Q2

This situation can lead to real wage unemployment of Q3-Q2.

This is why economists who believe labour markets are generally competitive argue that trade unions can cause inefficiency and unemployment.

Therefore, trade unions can increase wages for members – but those outside the union may be more likely to experience unemployment.

Trades Unions in a Monopsony

Initially, a monopsony can pay a wage of W2 and employ just Q2. Note this profit maximising level is a lower wage and lower employment level than a competitive equilibrium of Q1, W1.

In this situation, if a trade union bargains for W3, it does not create unemployment, but employment stays at Q2.

We can say that a trade union is counter-balancing the monopsony power of employers.

Do trade unions cause unemployment?

In theory, trades unions can push wages above the equilibrium wage rate. This rise in real wages can lead to less employment. However, the impact of unions on employment rates is not certain.

What determines the success of trades unions?

The decline of trades unions is partly related to the decline of heavy manufacturing – industries such as steel and coal – which were traditionally areas of strong union involvement.

The decline in the power of trades unions

Since 1979 Union membership has fallen for the following reasons 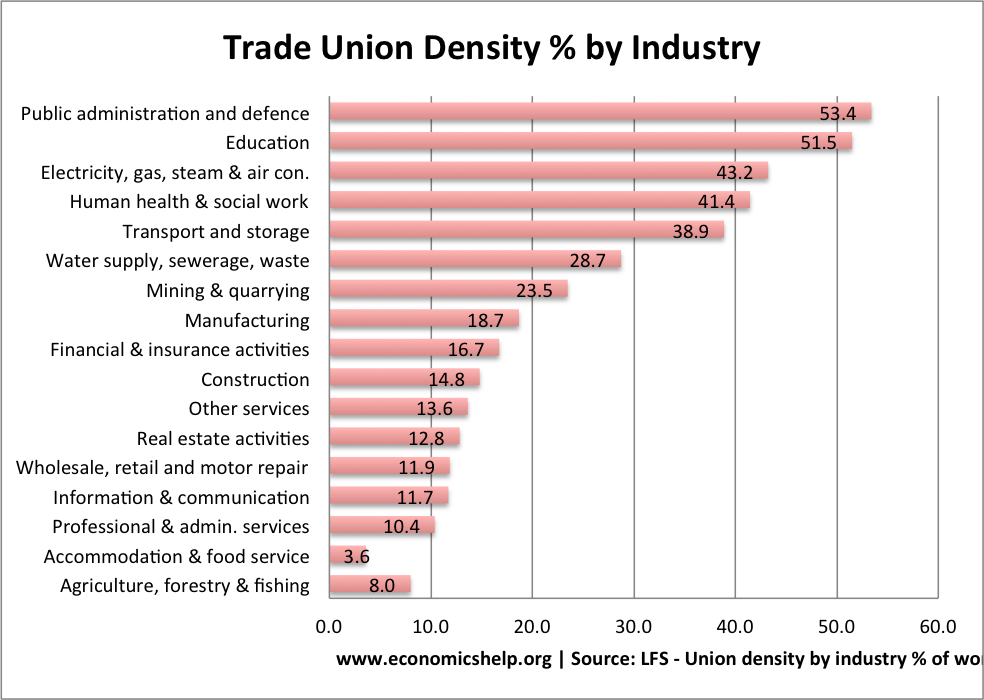 It depends on the quality of the relationship – is it antagonistic or mutually beneficial?

At the turn of the Twentieth Century, trade unions played an important role in increasing wages for workers. Real wages rose rapidly in this period. – It was also consistent with rising employment levels. In the late nineteenth century – many firms had a degree of monopsony power. Workers earned low wages and worked long hours.

With increased wages, there was also increased spending in the economy, which led to increased demand for other goods.

From the nineteenth century – there was a general fall in inequality – with rising real wages for the working class. This was due to the influence of trade unions – though other factors were more important such as higher productivity and new technology.