Cost-push inflation can lead to lower economic growth and often causes a fall in living standards, though it often proves to be temporary.

Cost-push inflation could be caused by a rise in oil prices or other raw materials. Imported inflation could occur after a depreciation in the exchange rate which increases the price of imported goods.

Many cost-push factors like rising energy prices, higher taxes, and the effect of devaluation may prove temporary. Therefore, Central Banks may tolerate a higher inflation rate if it is caused by cost-push factors. For example, in 2011, CPI inflation reached 5%, but the Bank of England kept base rates at 0.5%. This showed the Bank of England felt underlying inflationary pressure were low.

Other economists may fear that temporary cost push factors may influence inflation expectations. If people see higher inflation, they may bargain for higher wages and thus the temporary cost-push inflation becomes sustained.

In the 1970s, there is evidence that temporary cost-push inflation fed into permanently higher inflation. This is partly because workers demanded higher wages in response to growing inflation.

In the 1970s, inflation was caused by the rapid rise in oil prices, and also rising nominal wages. Workers had greater bargaining power to demand higher wages. 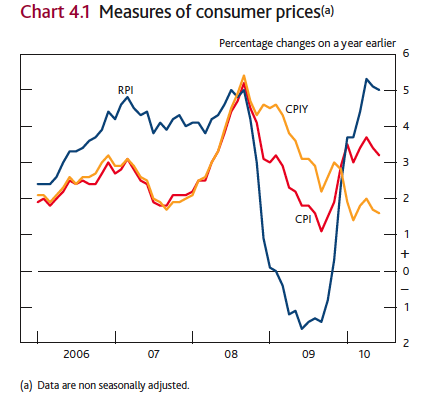 Some measures of inflation seek to avoid ‘temporary cost-push factors’ For example, CPI-Y excludes the effect of taxes. ‘Core inflation’ seeks to measure inflation by ignoring volatile factors such as commodities and energy.

The government could pursue deflationary fiscal policy (higher taxes, lower spending) or monetary authorities could increase interest rates. This would increase the cost of borrowing and reduce consumer spending and investment.

The problem with using higher interest rates is that although it will reduce inflation it could lead to a big fall in GDP.

For example, in early 2008, we had a high period of inflation (5%) due to rising oil and food prices. Central banks kept interest rates high, but this pushed the economy into recession. Arguably, interest rates should have been lower and less importance attached to reducing cost-push inflation.

In 2010, we might see a period of cost-push inflation, but, the Central Bank may need to adopt a certain flexibility in inflation targeting. There is no point in rigidly sticking to an inflation target if the inflation is caused by temporary factors.

The long-term solution to cost-push inflation could be better supply-side policies which help to increase productivity and shift the AS curve to the right. But, these policies would take a long time to have an effect.

from: Economic policies to reduce inflation

This website uses cookies to improve your experience while you navigate through the website. Out of these, the cookies that are categorized as necessary are stored on your browser as they are essential for the working of basic functionalities of the website. We also use third-party cookies that help us analyze and understand how you use this website. These cookies will be stored in your browser only with your consent. You also have the option to opt-out of these cookies. But opting out of some of these cookies may affect your browsing experience.
Necessary Always Enabled

Performance cookies are used to understand and analyze the key performance indexes of the website which helps in delivering a better user experience for the visitors.

Analytical cookies are used to understand how visitors interact with the website. These cookies help provide information on metrics the number of visitors, bounce rate, traffic source, etc.

Advertisement cookies are used to provide visitors with relevant ads and marketing campaigns. These cookies track visitors across websites and collect information to provide customized ads.

Other uncategorized cookies are those that are being analyzed and have not been classified into a category as yet.

SAVE & ACCEPT
Powered by