Global economic imbalances refer to an unfair distribution of resources between different countries or it may refer to a one-sided trade situation.

National economic imbalances can include

More details on these economic imbalances

Costs to the environment

Developed countries have having much bigger effect on global warming than developing world. This is an imbalance. The developed world benefits from the high levels of output, but the costs of CO2 emissions are felt equally by all.

There are huge variances in income. These statistics of GDP per capita do exclude PPP, but still poverty levels vary significantly across the globe. 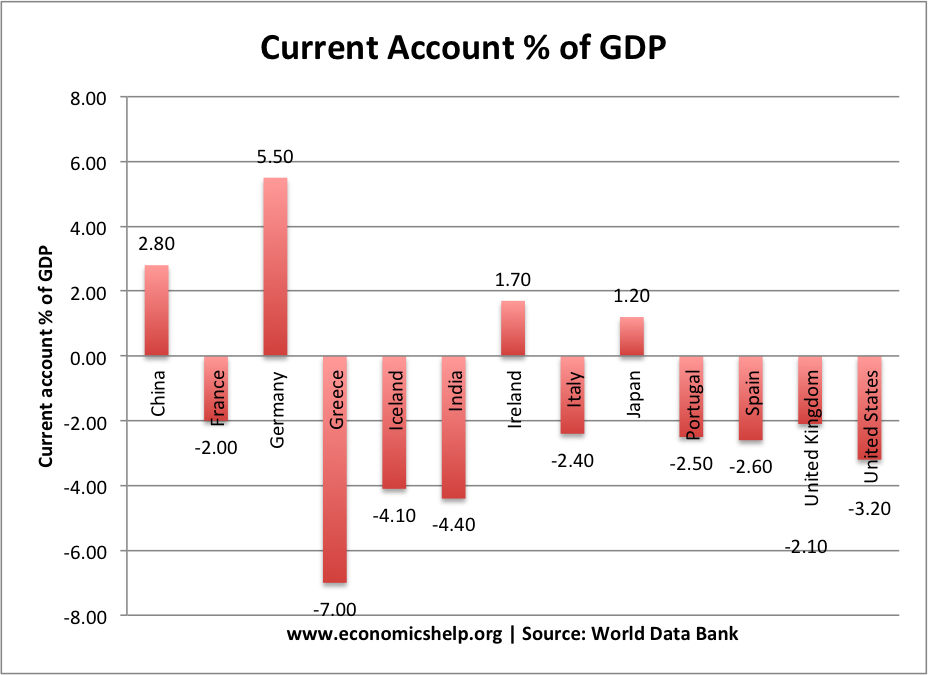 It shows Greece had a large current account deficit – compared with Germany with a surplus of 5.5% of GDP. It reflects the fact in the Euro, Germany exports are much more competitive than Greek goods.

Imbalance between east and west

This shows in 2007, global imbalances were greater between China and the US.

Reasons for Global Imbalances in trade

1. Because the US dollar is the world’s reserve currency, there has been a large demand for US securities like Treasury bills. These capital flows have effectively financed the US current account and explain why the US has been able to run a larger current account deficit than most other countries.

It made borrowing for the US cheaper. There was great demand for savings in the US. This encouraged a US banks to offer increasingly sophisticated forms of investment. It explains why there was so much high demand for US mortgage securities even though the risk was very high.

3. Undervalued Yuan. China has tried to keep the Yuan undervalued to boost its exports. This undervaluation of the Yuan has made Chinese exports cheaper and boosted the Chinese Trade surplus.

The aggregate current account position of developing countries swung from a deficit of about $80 billion in 1996 to a surplus of roughly $300 billion in 2004, a net move toward surplus of $380 billion.

In the mid 2000s, the global economy could be characterised in a few ways. This is a simplification, but it should help to understand.

If China hadn’t bought US Treasuries, there would have been lower demand for the price of bonds. This would have kept bond yields in the US higher. Higher interest rates may have moderated the economic expansion.

China’s growth is currently based on export demand. However, if there was an increase in consumer spending by the Chinese, they would be buying relatively more US exports. This would reduce China’s current account surplus.

Also, if the US saved a higher % of income, it would lead to Americans spending a lower amount on imports, which would also help reduce the US current account deficit.