Purchasing Power Parity PPP is a theory which suggests that exchange rates are in equilibrium when they have the same purchasing power in different countries.

Suppose a Big Mac costs £2 in the UK and $4 in the US. The correct exchange rate according to purchasing power parity would by £1 equals $2. This would leave a customer indifferent to buying the good in the UK and buying it in the US.

Purchasing power and differences in prices

If UK citizens want to buy more US goods, they will supply Pounds to buy dollars. This will put downward pressure on the value of the Pound helping to move exchange rate closer to the purchasing power parity equilibrium.

Why can exchange rates differ from purchasing power parity?

Exchange rates often diverge from purchasing power parity for long periods of time. This reflects other factors such as the risk and stability of investing in a certain country.

According to purchasing power parity which countries are overvalued?

The Euro and Yen look overvalued on purchasing power.

The Pound was overvalued in the dollar when it was at $2 to £1. This over-valuation was one reason why the Pound has consistently devalued in the past 15 years.

GDP per capita and GDP at PPP 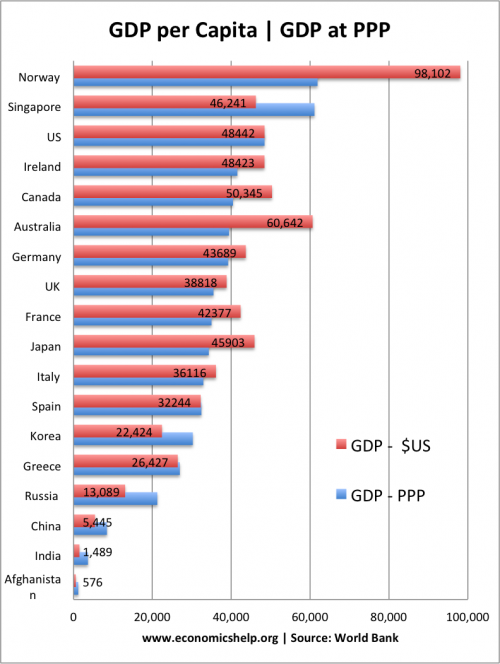 Comparing GDP per capita at $US to PPP

Norway’s GDP per capita is $98,000, but when adjusted for PPP it falls to $62,000. This reflects the fact that wages are very high, but then living costs are also high. PPP gives a better indication of what you can actually buy in different countries.

India’s GDP per capita is $1,489, but because living costs are very low. The PPP is considerably higher.

A simple way to understand Purchasing power parity is to use one good. One of the most widely available goods is the McDonalds Big Mac. The Big Mac index looks at the US dollar price of a Big Mac (which in theory uses similar ingredients).

The US dollar price of a Big Mac varies, indicating that nominal exchange rates do not reflect the purchasing power parity of a currency. For example, in India a Big Mac is $1.62, but in Norway it is $6.79.