A look at how a Central Bank may act as lender of last resort to commercial banks and the government.

A lender of last resort means if banks or the government are short of funds, the Central Bank will step into prevent illiquidity. This helps to maintain confidence in the banking sector.

If a commercial bank is short of liquidity (e.g. can’t meet demands for cash withdrawals from customers) the bank will be always able to borrow from the Central Bank. This means a commercial bank can keep fewer cash reserves and lend more out. It also means that customers will have confidence because they always know bank deposits are safe.

In the Great Depression of the 1930s, the US had no lender of last resort and many small and medium-sized banks. The great depression caused many firms and individuals to go bankrupt. Demand for withdrawing money grew. But, there came a point where banks didn’t have sufficient cash reserves so they had to turn customers away. When people hear a bank may not be able to pay back savings, everyone rushes to the bank (bank run) to make the situation worse. With no lender of last resort, 500 banks went bankrupt in 1932 alone – making the great depression even worse.

After this, there is now a lender of last resort in the US banking system.

Lender of last resort to government

Readers Question: if the lender of last resort calms gilts investors, keeps the yields low and helps government borrow cheaply and finance its deficit cheerfully, why is printing money bad news as it sends gilts upwards and generates inflation. in essence lender of last resort = money printing press, so how are these re conciliated?

It is an interesting observation. But, we can reconcile the two.

The Central Bank can act as a lender of last resort to prevent the government from suffering a liquidity shortage and failing to meet is short-term spending commitments.

Suppose a government is largely solvent. Only 3% of its tax revenues are devoted to interest payments, and public sector debt is around 60-70% of GDP.

This lack of a lender of the last resort in 2011, pushed interest rates on Euro debt close to 6% for many countries such as Ireland, Spain, Greece, Italy.

By, contrast, UK and US bond yields have fallen to record lows. Certainly having a lender of last resort is one important factor in keeping UK bond yields low. (UK deficit is actually higher than many EU countries with high bond yields). 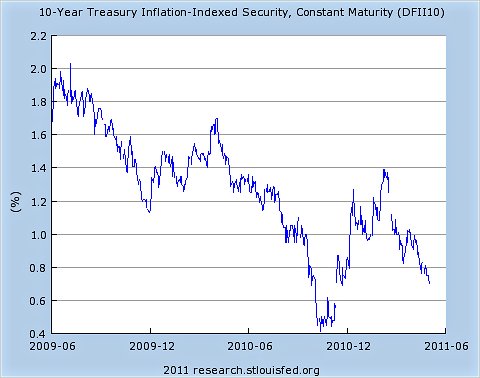 ECB starts to act as lender of last resort

In 2012, the ECB decided to start acting as lender of last resort with Mario Draghi stating ‘we will do whatever it takes’ After this announcement bond yields on European debt fell because there was greater confidence there would not be a liquidity shortage.

Yes, it definitely can. Usually, if a countries Central Bank started printing money to buy government debt, fears over future inflation would lead to rising bond yields. (how printing money can cause inflation)

In most economic circumstances, the Bank of England’s decision to create £275bn money and buy government bonds would create a much bigger fear of inflation and bond yields would rise much more.

However, in the current liquidity trap, the created money is not really inflationary (commercial banks are largely sitting on the extra cash) Therefore, although there is the theoretical risk of inflation, markets are not too concerned about inflation. At the moment, they prefer the risk of inflation from quantitative easing, rather than the risk of not having a lender of last resort.

Note: The Bank of England can also act as lender of last resort to commercial banks.