Wealth is defined as owning assets – giving a stock value of wealth at a particular time. Wealth can include

The ownership of shares enables the holders to grow their wealth over time. This can occur due to both capital gains (increase in the price of shares) and the reinvestment of dividend payments in buying more shares.

Whilst past performance is no guarantee of future results. The value of shares had typically increased by 6 to 7% over the long-term. This is borne out by evidence that the real growth of stock value (S&P 500) between 1950 and 2009 was 7.0% (link) – This takes into account reinvested dividends and inflation.

During this period, economic growth was roughly 2.5 – 3.0%, and this shows that wealthy investors are able to make a greater return than the average growth rate. A wealthy investor who reinvests share dividends will see an increasing share of national income.

The ownership of property can also lead to a significant wealth multiplier effect. Investors can gain both capital gains from the increased value of houses, but also receive rentable income which can be reinvested. 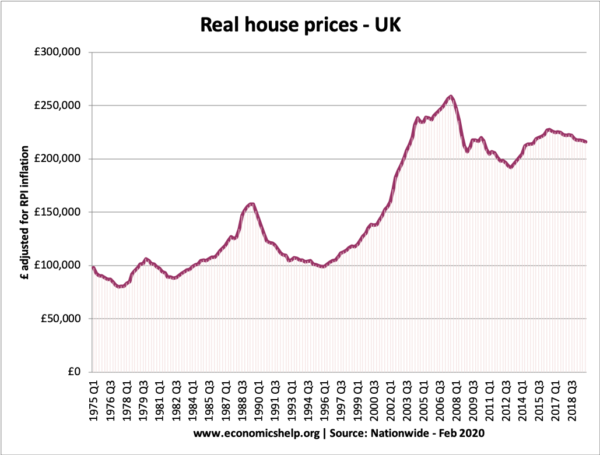 In many countries, house prices have risen above long-term inflation.  Between 1975 and 2006, real UK house prices doubled.

But in addition to capital growth, investors will get rentable income. In the UK, a typical rental income is 6% (Rightmove) – For a house worth £100,000, rentable income might end up being £6,000 a year.

Suppose an investor owns property worth £4 million, and the owner can rent out the property for 6% of its value per year. And from this rental income, the investor reinvests in buying more property.

If there is also house price growth of 5%, then the investor will quickly be able to see an increase in wealth.

With a rental yield of 6% and property growth of 5%, within two years, an investor has gained nearly £1 million increase in wealth – from an initial wealth of £4 million.

With cash or savings in a bank the rate of return on wealth is much lower, especially in the current era of low-interest rates.

Other causes of wealth multiplier effect