The Coronavirus has already led to disruption in manufacturing output, foreign travel and consumer demand. If the virus spreads and becomes a pandemic, what will be the likely economic effects?

In short, a global pandemic will have a serious supply-side impact – especially on foreign travel, manufacturing and investment. The uncertainty and decline in travel will also lead to people staying off work, losing income and causing a fall in demand. If it is relatively short-lived, the economy may quickly bounce back. But, if it is prolonged, it could lead to permanent loss of output – with vulnerable groups of workers particularly negatively affected.

Knock-on effects. Even for countries or regions not affected by the virus, the global interconnectedness of supply chains means that nearly all manufacturers are affected by the lack of availability of parts. This leads to supply bottlenecks. UK car producers have reported bringing spare parts in suitcases from China. Big companies like Apple, which produce the iPhone in China have warned of supply shortages occuring soon.

Confidence. In a time of uncertainty, firms will cut back on investment and wait until what happens. If the pandemic causes uncertainty for a prolonged period of time, it will cause investment projects to be delayed and even postponed completely.

Lost productivity. A rise in sickness and mortality itself has an economic cost.

If travel restrictions are imposed, there will be a big fall in demand for some sectors, especially travel and tourism. Already airlines have issued profit warnings for 2020 and some flights have been cancelled. It will also cause a significant fall in demand for certain tourist sights and related business. For example, the popular tourist city of Venice is completely deserted as people avoid due to the outbreak in Italy. This will be devastating for local business, such as restaurants and gift shops who rely on tourists.

Impact on workers. In recent years, there has been a rise in self-employed workers and workers on zero-hour contracts. This means that more workers are vulnerable to having to take time off work. If workers can work at home or get sick pay, their income will be maintained. But, for gig workers like delivery drivers and English language teachers, they could face very low income from travel restrictions and a decline in business.

Confidence. The stock market has seen its biggest contraction since the global credit crunch. With falls of 12%. A falling stock market can cause a decline in consumer wealth and hold back spending as people absorb the negative news. One study suggests falls in the stock market only have a limited effect on reducing GDP growth

“In the case of prolonged falls in share prices of 10 per cent, the QUEST model gives an additional negative output effect in the range of between -0.2 and -0.8, depending on the monetary policy response.” (effects of pandemic)

Limited scope for monetary policy. In western Europe and Japan, interest rates are already very low, there is limited scope for significant interest rate cuts. Even if rates were cut from 1% to 0.5%, it is not clear this would make much difference to the effects of the crisis. Japan has announced stimulus measures to shore up the economy – but given a prolonged period of stagnation it is uncertain whether this will make a significant difference.

Evaluation – How bad would the effects really be?

Liberia, for example, saw GDP growth decline 8 percentage points from 2013 to 2014 during the recent Ebola outbreak in West Africa.

The World Bank estimates that a very serious global influenza pandemic would cost the world economy $800 billion and kill tens-of-millions of people.

Time. An important question is how serious and prolonged is the crisis. If the crisis is less than six months, there is every chance that the economy can rebound with no loss of output. If firms delay production for three months, they build up a backlog of orders, when people return to work, this backlog can be solved due to people working over-time. This can lead to a post-crisis mini-boom.

Research into the 1918 Flu pandemic found that business could see up to 50% falls, but the negative effects were mostly short-term, and to some extent masked by the ongoing war. One study suggested that the virus killed 2% of the world population led to a 6% fall in GDP and an 8%  decline in consumption (link)

Also, the 1918 Pandemic was different – it was much more deadly than COVID-19, but there was very little shut down of economic activity. There was no global air travel, like we see now. There were fewer asymptomatic carriers – when you got the 1918 flu, you tended to be ill very quick.

How serious is the pandemic?

A model by the EU commission in 2006, tried to model the effects of a future pandemic on the economy. 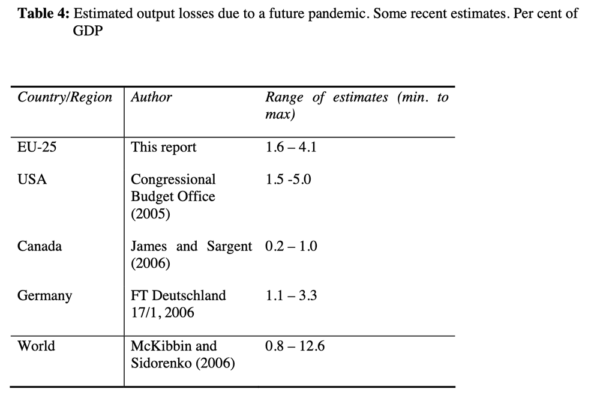 “Our basic conclusion is that, although a pandemic would take a huge toll in human suffering, it would most likely not be a severe threat to the European macroeconomy.”

Growth effects on EU-25 of a pandemic starting in the second quarter of 2006. Baseline scenario

Can people work from home? In recent years, we have seen a shift in people working from home. A pandemic crisis would speed up this shift and more firms could encourage people to work from home. This can work for some sectors, but you cannot outsource manufacturing or nursing, supermarket sales. It is clear that any pandemic would hit vulnerable sectors much more.

Can monetary/fiscal policy offset the fall? Usually, if we get a demand-side shock (e.g. fall in confidence), the monetary authorities can cut interest rates to boost demand. The government can pursue fiscal policy to increase public sector investment. This helps to maintain aggregate demand. The problem is that a pandemic is both a demand-side and supply-side shock. If people stay at home because they are sick or because they fear to go to work, demand-side policy cannot deal with that. A tax cut does not particularly help if you are not working or it is difficult to get goods.

How much would economic activity cease? In the beginning of a pandemic, where is highly localised, there is a strong case for strict quarantine, leading to the factory shuts downs we see in China and ghost towns in Italy. However, if the pandemic reaches a tipping point and the virus becomes widespread, severe travel restrictions may not be effective anyway. It is uncertain how people will respond. It may reach a point, where critical industries like foods supply have to continue – regardless of the risk of transmission. The WHO state dealing with a pandemic is not just about the direct health effects on sickness and possible fatalities, but also wider issues such as the potential breakdown of social order. E.g. failure to provide sanitation and food supplies could cause more serious problems than the virus itself.

The outbreak of Covid-19 reminds us how integrated the global economy is, and how vulnerable the economy is to global travel of people and goods. The virus will definitely have a negative effect, which will depend on the severity of the outbreak. However, if it is relatively short-lived (3-6 months) then the long-term lost output may prove quite limited. However, on the other hand, it could highlight the underlying weakness of the global economy (secular stagnation, weak demand, weak productivity). This may prove to be a tipping issue, which causes a prolonged recession – even when the outbreak disappears.

1 thought on “Economic effects of a pandemic”