Since the end of 2019, the US economy has grown at the fastest pace in the G7. 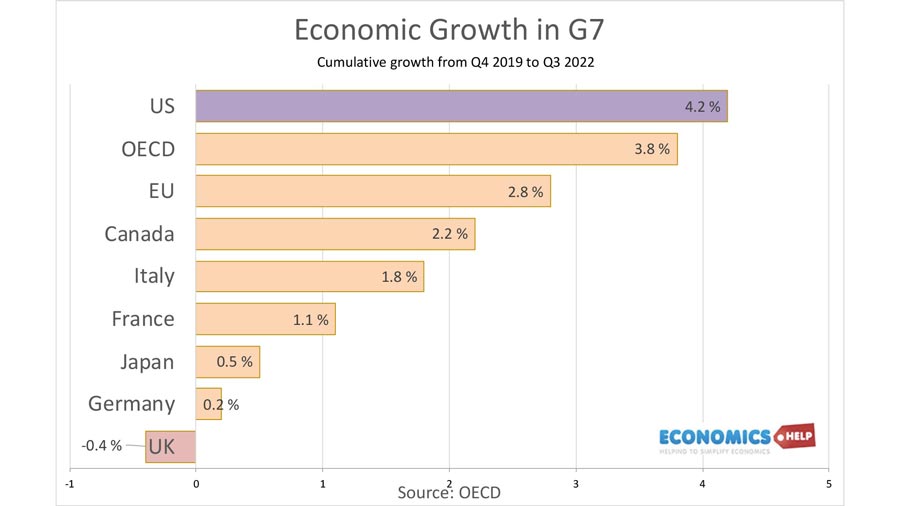 President Biden can claim the fastest job growth of any president. 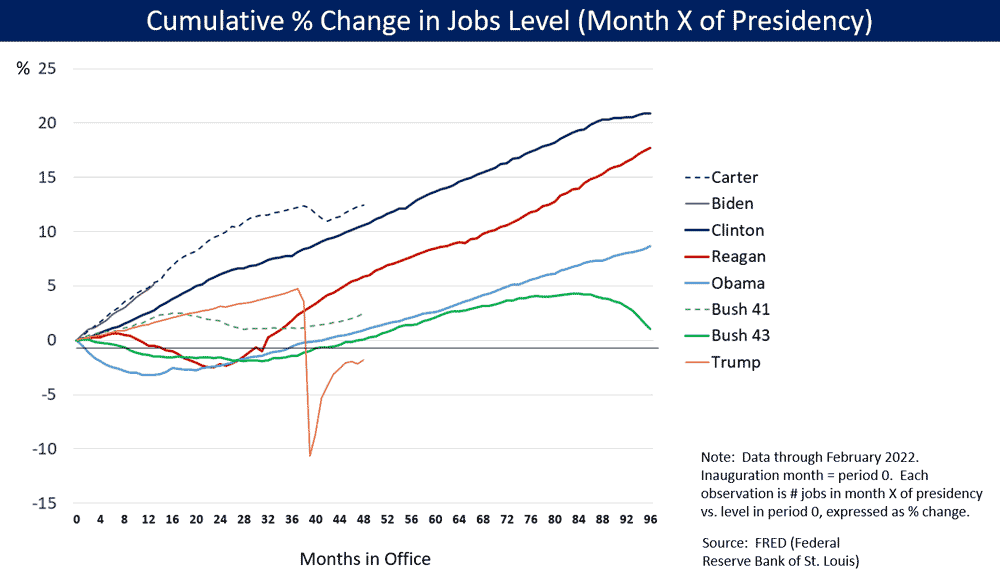 Yet despite strong growth in jobs and GDP, there are record low levels of dissatisfaction as Americans feel the pinch of inflation and falling real wages. Firstly to what extent is Biden to blame for inflation and how should we view his economic record? 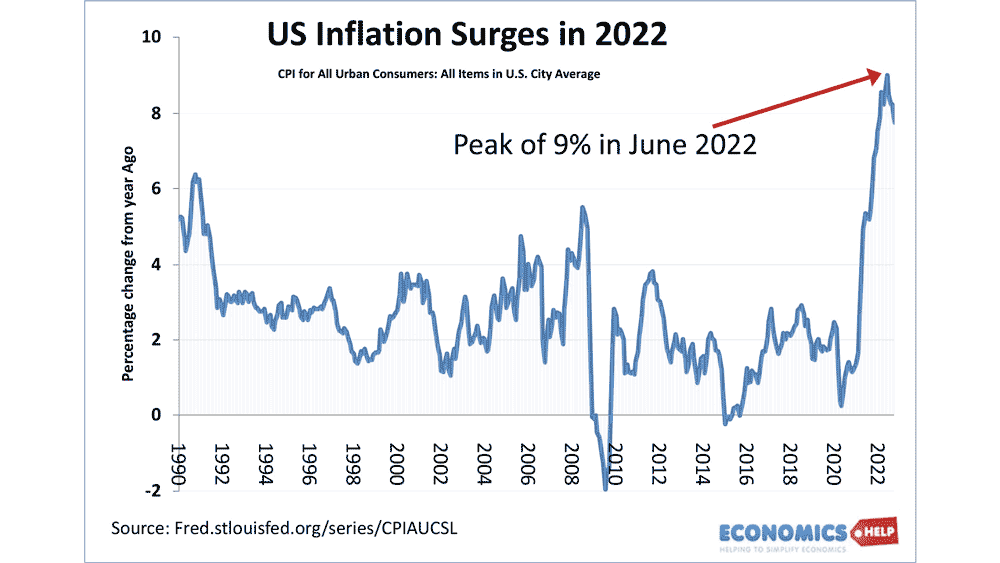 The American Rescue Plan $1.9 trillion was the largest stimulus package in US history and meant Biden has had a more direct impact on the economy for good or ill than most other presidents.

Research by Julian di Giovanni at the Federal Reserve Bank of New York suggests that supply shocks may account for 40 per cent of inflation, with the remaining 60 per cent explained by shocks to aggregate demand. (FT) 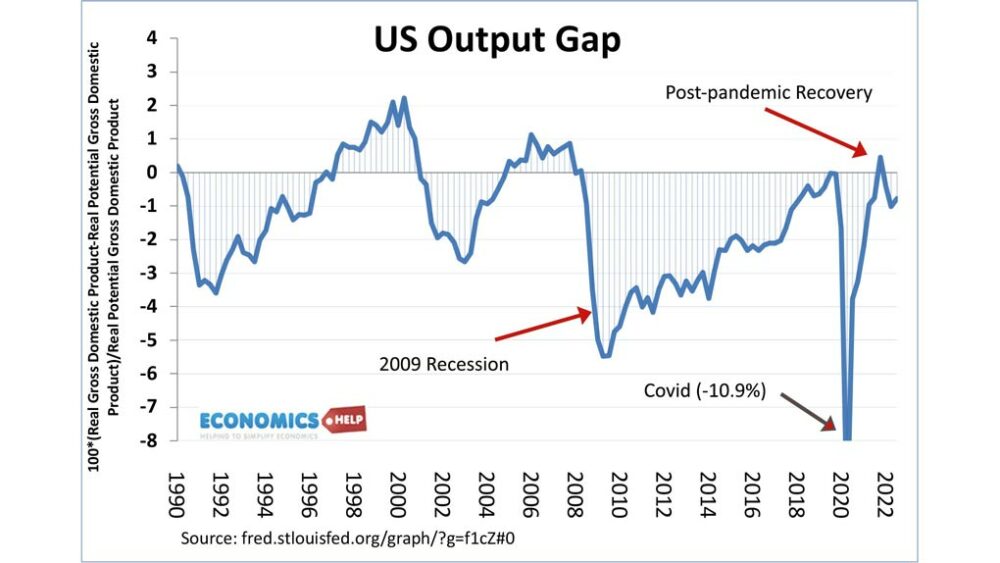 The US Output Gap doesn’t show a very large overheating, suggesting a significant proportion of inflation was supply-side factors.

The Federal Reserve estimated the fiscal stimulus only added perhaps 2.5% points to US inflation. 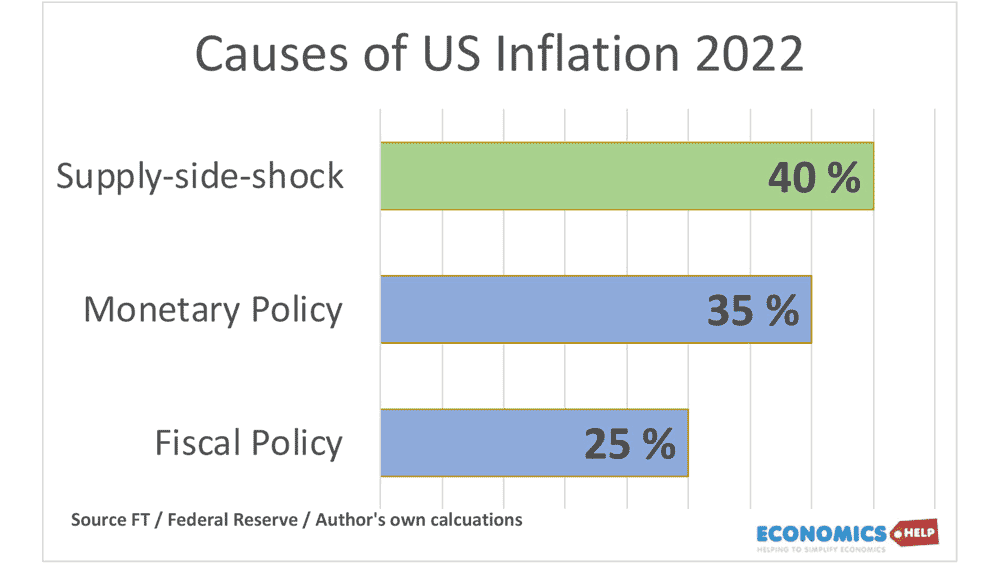 A bigger factor in excess demand factor was the Fed’s very loose monetary policy, keeping interest rates too low for too long as they underestimated the inflationary boom. 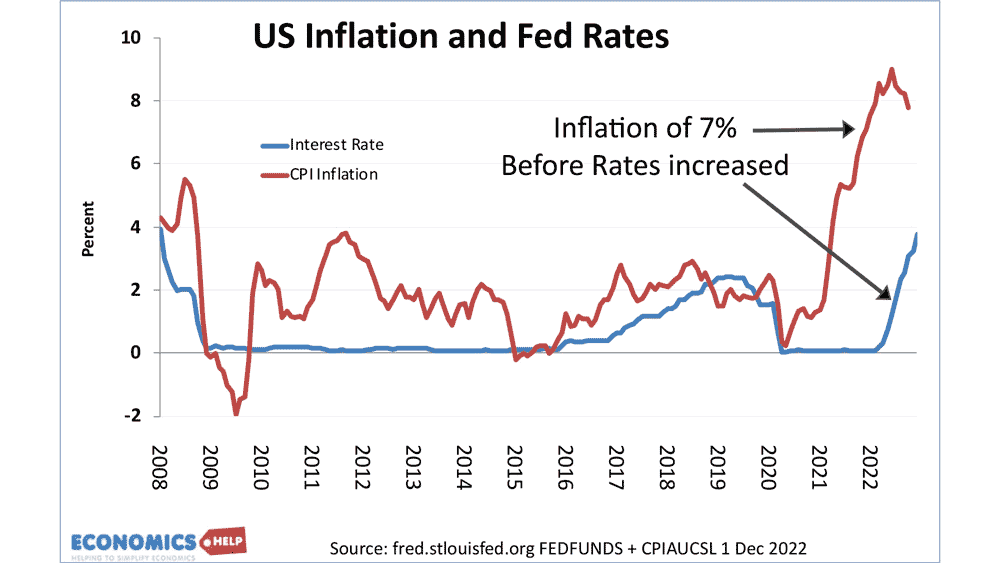 You can see rates didn’t rise until mid-summer when inflation was already 7%.

And as oil prices start to fall due to the global slowdown, US inflation is falling. Also, worth pointing out that US inflation is lower than many EU countries, helped by a strong dollar and greater supplies of domestic gas.

Usually, Presidents only have a very limited impact on inflation. Looking at the inflation rates of past presidents, you can see Carter was hit by the 1970s oil surge, also interesting to note Carter shares Biden’s impressive job growth but both presidents were overshadowed by inflation. Clinton benefited from low global inflation. Under Reagan inflation fell, but this was not Reagan’s policy but very tight monetary policy from the Federal Reserve. 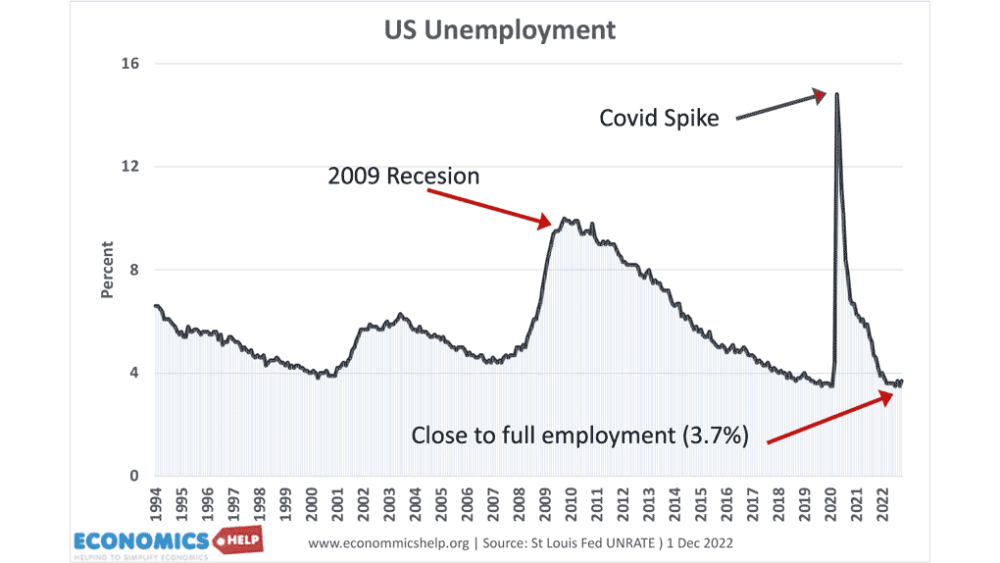 We can attribute some inflation to Biden’s fiscal expansion, but on the other hand, it did prevent a cash crunch for the poorest and contributed to a boom in job recovery and growth. Despite all the problems, an economy at full employment is an undoubted success 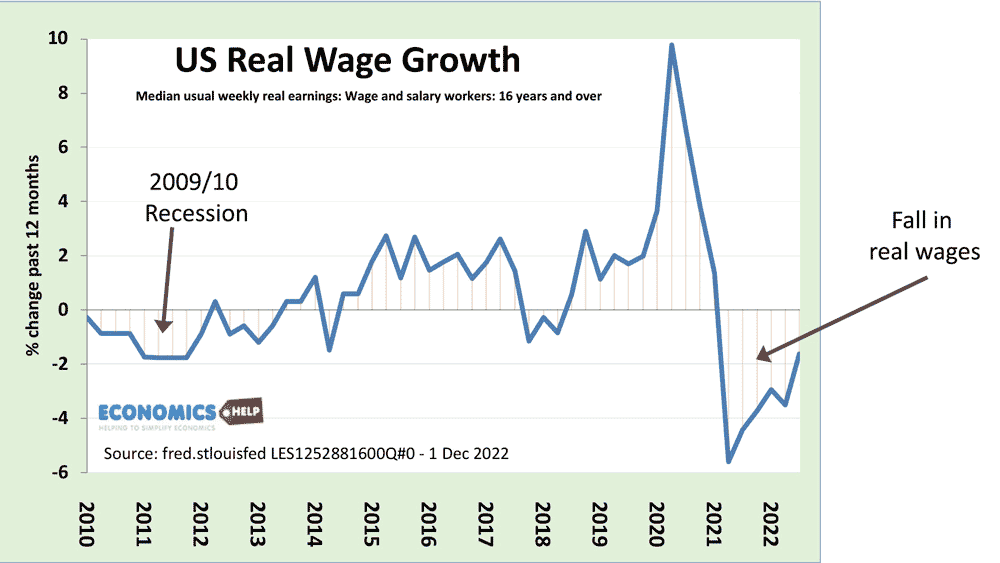 Whoever is to blame for inflation – it has caused falling real wages. Yet at the same time, there has been a record rise in corporate profit. You can see corporate profit has surged from $2 trillion to $3 trillion in just a couple of years – equivalent to an average $3,000 per US citizen. 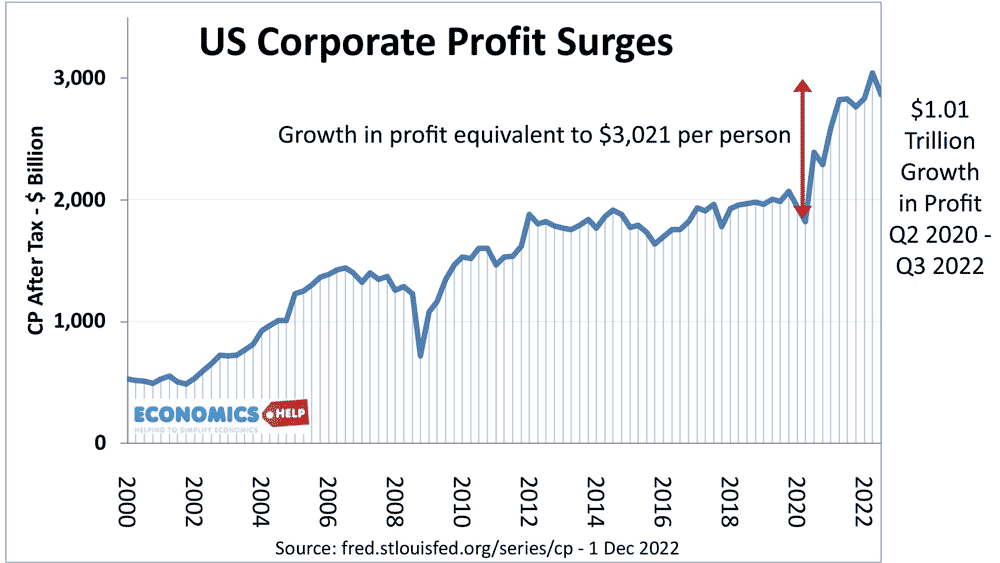 Yet whilst company profit rises, real incomes have been falling. Inflation has benefited US corporations that have increased profit margins, but not increased real wages for workers. 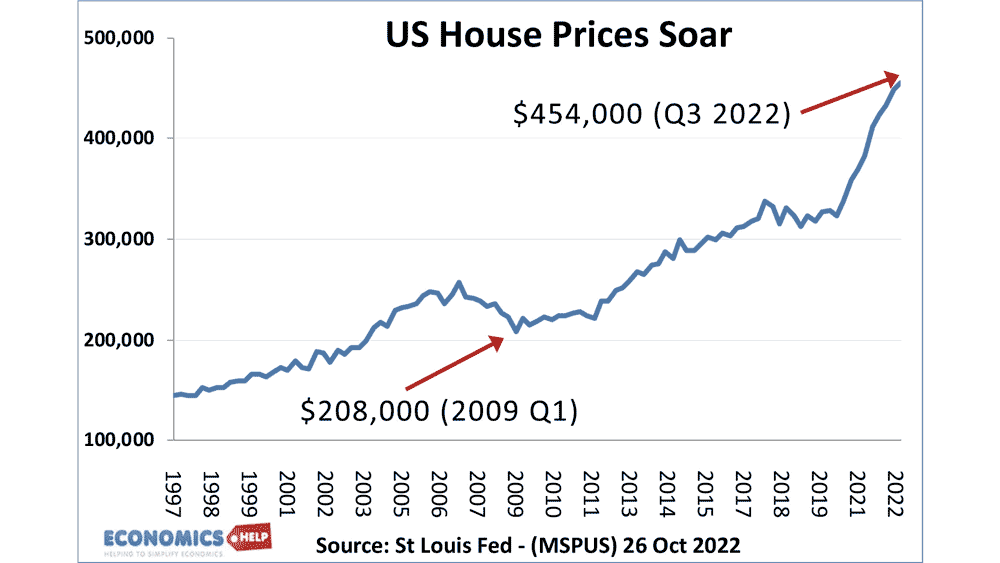 The inflationary period of 2020-22 contributed to a surge in house prices, I will look at the prospects of a US housing price crash soon. If prices do fall significantly the problem is it will likely bring the economy down with it too. So much household wealth is tied up in housing, that falling prices inevitably reduce consumer spending.

A big question is what happens next to Inflation?

Will inflation fall? Some economists like Paul Krugman are hopeful inflation will fall, given the decline in forward-looking market rents, falls in the price of shipping and recent decline in oil prices. Others are more fearful that the length of inflation has increased inflation expectations and core-inflation factors, such as wage costs have been rising to the highest level for many years. 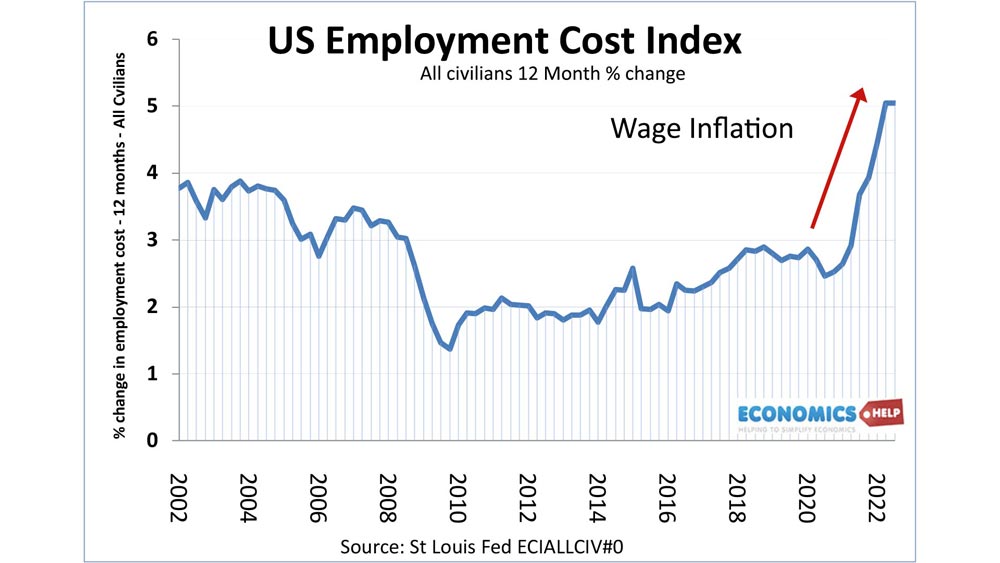 More important for the economy in the long-term is legislation passed in the first term. And Biden has passed three important bills 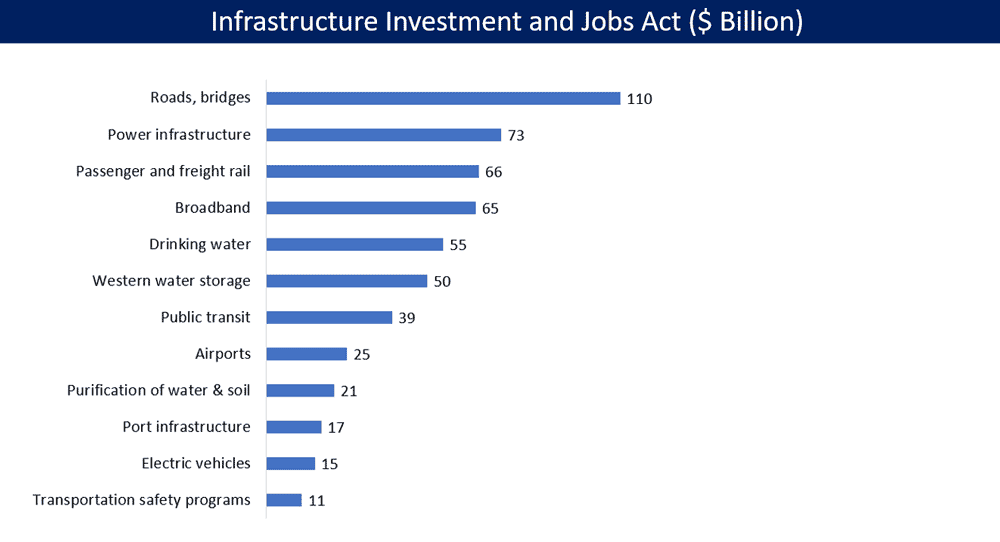 The Infrastructure bill includes $1 trillion to repair and upgrade America’s ageing infrastructure. After years of neglect, there are many projects which will give high rate of return and boost long-term competitiveness and productivity. From 2022 to 2026 federal infrastructure spending will rise from about 0.8% of annual GDP to 1.3%.

The second piece of legislation aims to boost the US ability to produce microchips – seeking to wrest control of the industry from reliance on China. Some argue government subsidies could easily end up being wasteful, others are more optimistic they will strengthen long-term US capacity.

His signature legislation was the Inflation Reduction Act, which was little about reducing inflation, but mostly about encouraging renewable energy. It includes $369bn of subsidies and tax credits to encourage green energy, carbon capture, and electric vehicles. It has already started to transform industries’ approach to future development and will undoubtedly play a role in developing a greener economy which has a better chance of meeting climate targets. It also included higher taxes on the wealthy and reduced the price of prescription drugs. Given record, after tax corporate profits the new book income tax is a welcome source of revenue from companies earning more than $1 bn.

Economists are more critical of President Biden’s protectionist approach. Whilst politically popular at home with talk of bringing back jobs. It leads to higher tariffs on imports and could undermine free trade across the world.