Definition of creative destruction This refers to the process of how capitalism leads to a constantly changing structure of the economy. Old industries and firms, which are no longer profitable, close down enabling the resources (capital and labour) to move into more productive processes.

Creative destruction means that the company closures and job losses are good for the long-term well-being of the economy.

It can be seen from both a negative and positive perspective.

Karl Marx wrote at length about the nature of capitalism causing large-scale loss, which enabled new wealth to be created. Marx saw wars and economic crisis as methods for destroying production and enabling capitalism to start a new round of wealth creation for the owners. Although Marx saw how Capitalism could reinvent itself, he also felt it’s inherent tendency to self-destruction would eventually lead to its end.

“In these crises, a great part not only of existing production, but also of previously created productive forces, are periodically destroyed.”

“Capitalism […] is by nature a form or method of economic change and not only never is but never can be stationary. […] The fundamental impulse that sets and keeps the capitalist engine in motion comes from the new consumers’ goods, the new methods of production or transportation, the new markets, the new forms of industrial organization that capitalist enterprise creates.”

Ironically, for a concept derived from Marxist thought, free-market economists have seen creative destruction as a necessary and inevitable process of economic development and generally oppose government attempts to hold back this process of decline and renewal. Some economists even go so far as to argue that if banks fail, the government should not intervene as it is better to allow bad banks to fail and avoid the government artificially propping up the financial system. 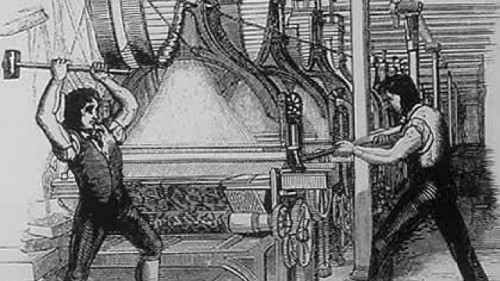 Powered looms. The invention of the steam-powered loom reduced the cost of making clothes. This put the traditional cottage industries out of business. But, it helped a new industry of manufactured cotton and clothes which created new kinds of jobs. (This particular invention led to the Luddites, who saw the new power looms as destroying their livelihoods)

The large mills which once dominated the towns of northern England have now closed down due to cheaper imports from Asia. As the mills have closed down, the local economy has been more geared towards the service sector and less towards manufacturing.

The music industry has seen numerous technological changes which have led to the rise and fall of several companies.

The problems of creative destruction

Free-market economics makes a case for allowing any unprofitable firm to go out of business whatever the consequences. However, some argue that the process of creative destruction can lead to long-term damage and needs to be more carefully managed.

In these cases, the lack of profitability is not a sign the firm is terminally inefficient. In these cases, there may be a strong case for temporary government help to enable the firm to come through the short-term difficulties. It may also be possible for a firm to restructure and diversify – this can be less damaging than wholesale closure.

The Luddites protested against the introduction of new machines which took the jobs of skilled artisans. However, although jobs were lost in hand-spinning – new jobs were created in other areas of the economy.