Despite the weakness of the UK economy, the Pound is forecast to rise against the Euro, due to the ongoing uncertainty surrounding the debt crisis in the Eurozone. With Greece and other countries at risk of default, and even facing the prospect of a Euro break up, the Pound Sterling looks relatively attractive – despite low growth and low interest rates in the UK.

The UK economy is slowly emerging from the worst recession since the Great Depression of the 1930s. The recovery is being helped by:

However, the recovery is being held back by

In 2012, inflation is likely to fall as cost-push factor expire, however growth is still likely to be anemic and the Bank of England is very unlikely to increase interest rates before the end of 2012 (See: interest rate predictions)

With interest rates of 0.5% and slow growth – this would usually lead to a weak Pound. (Investors would save money in countries offering a better rate of interest) However, at the moment, there are few opportunities for investors to find high interest rates with also security of investment. For example, investors were buying Swiss Francs, but the Swiss authorities had to intervene to prevent the Swiss Franc rising too quickly.

Crisis in the Eurozone 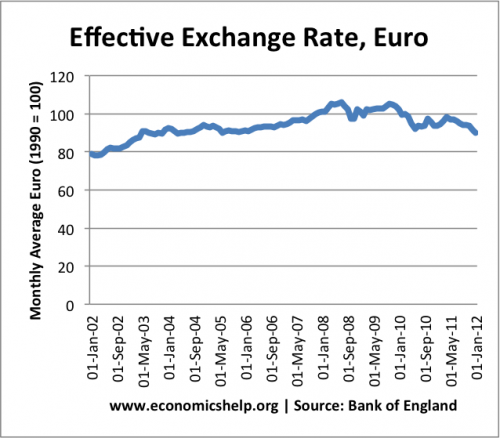 Continued weakness in Euro since the start of 2010

The crisis in the Eurozone has led to a fall in the value of the Euro over concerns of debt default and a possible Eurobreak up. Despite UK debt being high (UK still has one of highest budget deficits in EU) markets are relatively confident  that the UK will not have default problems (e.g. Bank of England has been able to help by buying bonds) The UK is one of few countries to retain its AAA rating. (compared to France, who were recently downgraded.

By contrast the Pound may weaken against the Dollar. Although, not spectacular, the US economy appears to be recovering quicker than European economies. Growth is higher than the UK, and US unemployment has showed signs of falling. The US may be less affected by a crisis in the Eurozone than the UK.

Quantitative Easing and Value of Pound

In past few years, UK has embarked on a round of quantitative easing – usually this creation of money would cause inflation and weaken the Pound. However, at the moment, there is no sign of inflation in the UK, due to high unemployment and the level of spare capacity. However, unwinding quantitative easing may be an issue in the future.

See: Problems Greece has with being in Euro and trying to deal with high debt.