Definition of Participation Rate. The participation rate is the number of people working or actively seeking work as a % of the working population (16-65).

The participation rate is similar to the concept of being ‘economically active’. If a person drops out of the labour market, they are considered economically inactive and no longer participating.

Why People May Drop out of Labour Force

Why Participation Rate may Fall in a Recession. 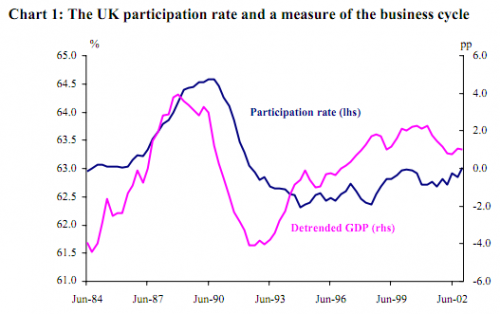 If someone is voluntarily unemployed, they are generally considered to be not actively seeking work. Therefore, they could be considered economically inactive. However, it depends how voluntary unemployment is classified and measured. Some people may prefer to remain on benefits than take a low paid job, therefore they could be classified as ‘voluntary unemployed’. However, if they are still actively seeking a higher paid job, they may still be viewed as participating in the labour market. This is a potential grey area, which used to lead to much discussion when agreeing on market scheme for Edexcel Paper on Labour markets.