In one sense the US is facing a debt crisis. The level of government borrowing has risen sharply as a % of GDP, and given current spending commitments, the forecast for borrowing is to continue to grow. 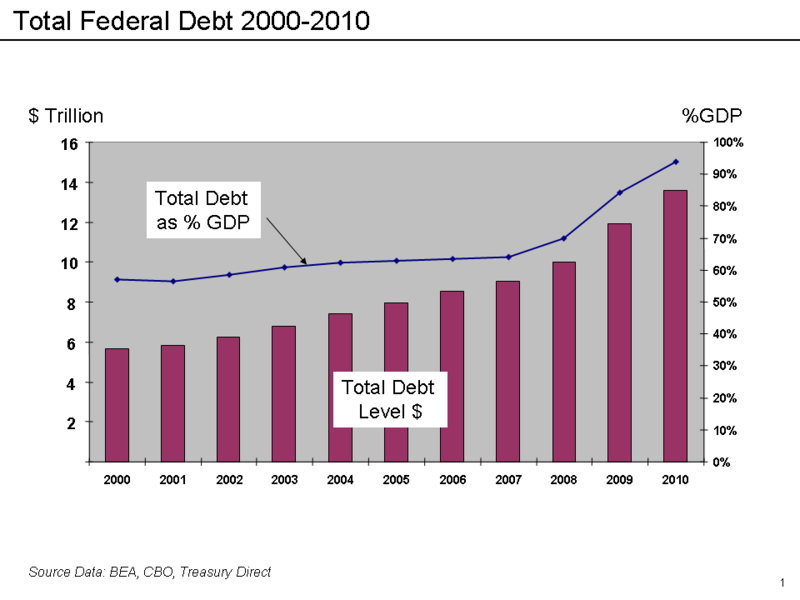 Nevertheless, despite disputes over raising debt ceiling, the US doesn’t currently face a crisis like Greece or other Euro countries. Bond yields on US debt are still low (and have fallen since start of recession in 2008)

1. Cyclical Factors / Discretionary spending
The recession and financial crisis of 2008 led to a fall in tax revenues. Falling bonuses led to lower income tax. There was also a fall in stamp duty as tax revenue from house sales declined. Since the recovery has been weak, there has been no sign of these tax revenues returning.

US unemployment benefits are relatively low, but, even so, the large rise in unemployment has triggered an increase in social security related payments. 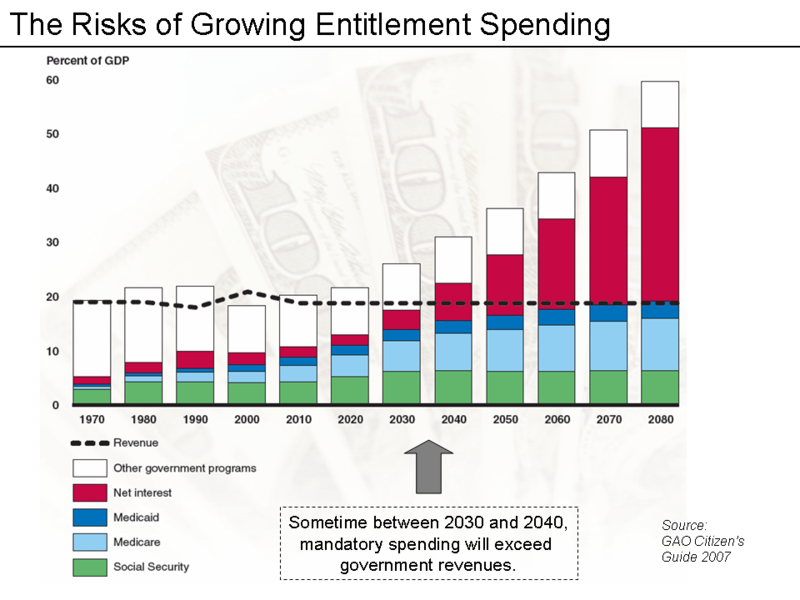 The biggest single factor in explaining the rise in US public sector spending is  health care costs. In the 1970s, US government spending on health care was 7% of GDP in 2011; it is now 15% of GDP. (American v British Health care)

In the US, the fragmentary system of private provision and government benefits means that the government end up paying for expensive treatment for many people.

The increase in health costs is being exacerbated by an ageing population who tend to need more treatment. Also medical advances mean there are now a much greater diversity of (expensive) medical treatments.

The ageing population also puts pressure on government spending on pensions. Currently the % of the population over 65 years old is 13 percent. This is expected to reach about 20 percent by 2050.[changing demographics US] This is actually much lower than many other Western countries. But, still represents an increase in the pension burden.

The US has one of the lowest effective rates of corporation tax an income tax in the OECD, but more than anywhere else there is a strong political reluctance to increase taxes. The Republican party remain convinced that any tax increase would undermine the US economy.

Two wars in the 1990s and 2000s have increased the US spending on the military. Discretionary spending, which includes defence rose to 9.3% last year. The highest since the late 1980s.

Usually congress agrees to allow debt ceiling to rise. But, currently, the Republican party is demanding improvements to budget come from spending cuts rather than tax increases, this political impasse is making markets more nervous over buying US bonds

The problem is that the US faces demographic factors which put more pressure on government spending. But, there is a reluctance to either increase taxes and / or cut spending in areas which are claiming the biggest increase. As a result spending is often cut in easiest ways such as cancelling capital investment projects (high speed rail) or reducing benefits which hurts the poorest.