Readers Question: Why, on the one hand, do commentators talk about organisations and consumers paying off debt and not having money to spend. And on the other hand, Corporations sitting on large piles of cash?

In the boom years 1995-2007, UK economic growth was led by consumer spending and a rise in borrowing. The saving rate fell to close to 0% in 2007. This is a record low, and very different to say the saving rate in Germany which is higher. 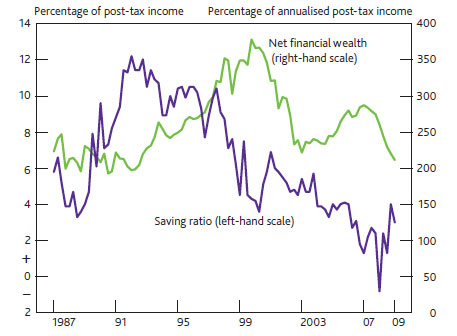 Also, in this period, many banks increased their levels of lending and reduced the amount of cash reserves that they had. This meant banks experienced a shortage of cash ‘liquidity shortage’ when the credit crunch hit in 2007-08.

Recession and Rise in Saving Ratio

In a recession, people tend to change their behaviour quite significantly.

In the boom years, people have the confidence to borrow and spend. But, in late 2007, everything changed, people began to fear unemployment. Therefore, instinctively people start to concentrate on spending less, saving more and paying off their debts. This switch to saving actually causes a fall in consumer spending and even lower growth. (Keynes called it a paradox of thrift – basically individual decision to save more cause a fall in economic output).

Therefore, after the credit crunch, we see a sharp rise in the saving rate from 0% to 5%. People concentrated on paying off their mortgage and don’t take as much new debt on.

Why are some Corporations sitting on large piles of cash?

Not everyone is suffering huge levels of debt. Some companies have large reserves of cash and a decent profit stream. However, they respond to the recession in a similar manner. Concerned about prospects for economic growth and low consumer spending, they don’t take on risky investment decisions. Firms would rather wait to see an improvement in prospects for growth. Therefore, rather than build expensive new factories or try and buy other companies, they wait.

A recent analysis by Bloomberg showed that Europe’s biggest companies (excluding banks) sitting on £445bn cash. This is 16pc higher than the position at the end of 2007 before the credit crunch hit. (Telegraph Dec 2010)

Why Are Banks Not Lending New Created Money?

Another complaint is that the £275bn of extra money (created by Bank of England through their policy of quantitative easing) has not really led to higher levels of bank lending. Banks have sold bonds to the Bank of England gaining higher reserve ratios. However, despite higher cash reserves, banks are still reluctant to lend. They would rather concentrate on improving their reserve ratios (the amount of cash they have) and are reluctant to lend to firms with the prospect of double-dip recession.

In normal circumstances, they would lend this extra cash. But, this balance sheet recession is different to usual.

Basically, the answer is that some groups of people are paying off their debt. Other companies don’t need to pay off debt, but also they don’t want to invest their spare cash because economic circumstances are grim and people would wait.

2 thoughts on “Question: Companies with debt and savings”