A look at some of the advantages and disadvantages of hosting a major sporting event.

Hosting a major sporting event can give many economic, social and cultural benefits. However, the costs of hosting the event can also be quite high. What determines whether the benefits outweigh the costs?

Advantages of hosting a major event

1. Raise the profile of the city/country

Increasing the profile of a city can lead to lasting economic benefits. For example, cities which host the Olympics can be assured of a persistent increase in recognition and tourism. Barcelona, Sydney, Beijing have all seen this from hosting the Olympics. For a country like China with a controversial human rights record, hosting a major sporting event can be a way to gain greater international acceptance. When South Africa hosted the Rugby World Cup and later the Football World Cup, it was a defining moment in highlighting the new ‘post-apartheid’ South Africa. This raised profile can be important for giving economic benefits, such as attracting tourists and business investment. The importance of this point depends on the particular city. For South Africa, the World Cup made a big difference to perceptions of South Africa. For a city like London, which already has a very strong reputation, hosting the Olympics will be less influential. However, even hosting the Commonwealth Games can be beneficial for a city like Manchester, which benefited from hosting games, despite the persistent rain!

A  significant benefit is the long-term investment which comes from preparing for a major event. The city/country will have a legacy of improved sporting venues. Also, cities will usually have to invest in infrastructure and transport to cater for an influx of tourists. For example, there has been significant investment in public transport projects around London. This will leave a lasting legacy for residents of London, especially East London. From the 2012 London Olympics, the east of London has benefited from improved public transport. 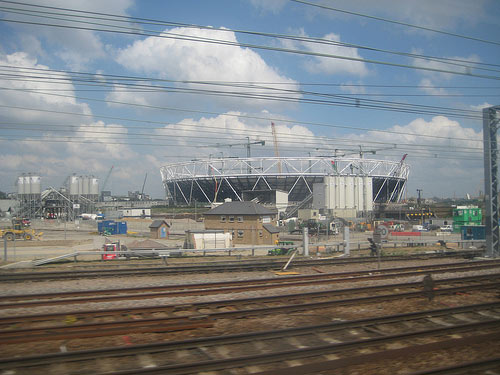 The several years of planning and investment will help create jobs and can revitalise depressed cities. This was an important claim of the London Olympics, choosing a site in East London, which at the time was relatively depressed. It is estimated the London Olympics 2012, will create 8,000 full-time jobs and lead to a boost in economic output of close to £2bn [1]

The Olympics will see a surge in visitors, athletes and media. This will provide an increase in spending and injection of money into the local economy. However, this injection of money, will only be short-term (a few weeks) and make little overall impact on the wider economy. Also, the injection of foreign visitors may be offset by locals leaving to avoid the influx and over-crowding.

1. The cost of building stadiums

To host a major sporting event like the Olympics can cost significant sums, which have to be paid for by the taxpayer. Costs of the Olympics have a tendency to rise over time and be much greater than expected. The Montreal Olympics was estimated to have cost $120 million (1970) and then rising to $310 million (1973). The final cost was around 13-times greater at $1.6bn. It took 30 years to pay off the Olympic debt [2].

Many facilities built for the Olympics can never be fully used again. e.g. an 80,000 athletic stadium will rarely be full outside of the Olympics. This can be mitigated by careful planning. e.g. the London Olympic Stadium will be used by West Ham football team and was used for legacy athletic events such as the 2017 World Championships. Other Olympic facilities, like the Olympic village, will be converted into affordable housing. However, some cities which failed to plan for the legacy of the Olympic were left with unused giant stadiums.

If things go well, a city can benefit from positive publicity, but if things go badly, it can cause the opposite. For example, the Winter Olympics has received adverse publicity because of corruption and cost overruns. The football World Cup in Qatar could backfire if players complain about the heat and conditions of migrant workers. Delhi suffered negative publicity over the state of its facilities at the Commonwealth Games.

Major sporting events increasingly have to implement higher levels of security. This is both costly and can restrict freedom of movement of local citizens during games.

Some cities have seen an increase in tax post games to finance a loss of putting on the sporting event. The post-games cost of London is uncertain.  (BBC link) This increase in cost has made hosting the Olympics less politically popular.

To finance the Olympics, major corporate donors are given exclusive rights, which means many local suppliers are excluded from the events themselves. For example, there are official water suppliers, official fast food and official soft-drinks. If you don’t pay large sums, you will not be able to supply inside Olympic venues.

Should a country like the UK be hosting a major event with a large national debt?

The investment and spending are important given the state of the economy. With unemployment close to 3 million, this investment helps create economic recovery. The investment has a potential for leading to higher growth and higher future tax revenues.

Some cities have seen a long-term boost to tourist numbers from hosting a major event. In particular

In terms of cities which experienced high costs, and limited benefits

15 thoughts on “Advantages of hosting a major event”