What are the Global Imbalances? 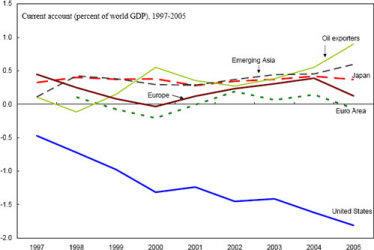 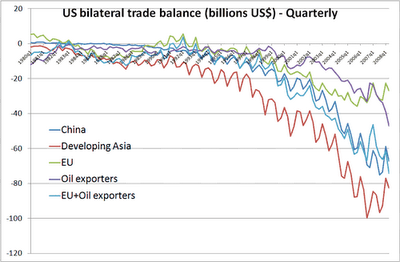 3. Savings Glut in Asia. Low savings and high borrowing in US

The high level of savings in Asia was one factor behind the very low savings rate in the US. 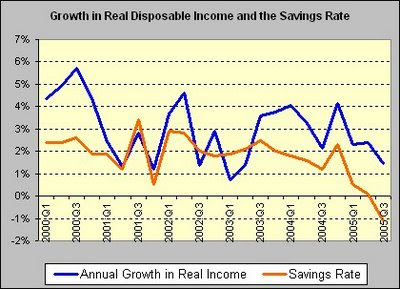 2. Low Long Term Interest Rates. The high demand for US securities such as US Treasuries and mortgage backed securities helped keep US interest rates low.

It made borrowing for the US cheaper. There was great demand for savings in the US. This encouraged a US banks to offer increasingly sophisticated forms of investment. It explains why there was so much high demand for US mortgage securities even though the risk was very high.

3. Undervalued Yuan. China has tried to keep the Yuan undervalued to boost its exports. This undervaluation of the Yuan has made Chinese exports cheaper and boosted the Chinese Trade surplus.


The aggregate current account position of developing countries swung from a deficit of about $80 billion in 1996 to a surplus of roughly $300 billion in 2004, a net move toward surplus of $380 billion.

Basically, the problem is that the global saving glut made it easier for Americans to borrow and this encouraged an asset bubble (the current bubble could be in US Treasuries). I will look in more detail at this tomorrow. Readers Question: Why do global imbalances and the high demand for US securities such as US Treasuries and mortgage backed securities help keep US interest rates low “

In the mid 2000s, the global economy could be characterised in a few ways. This is a simplification, but it should help to understand.

If China hadn’t bought US Treasuries, there would have been lower demand for the price of bonds. This would have kept bond yields in the US higher. Higher interest rates may have moderated the economic expansion.

China’s growth is currently based on export demand. However, if there was an increase in consumer spending by the Chinese, they would be buying relatively more US exports. This would reduce China’s current account surplus.

Also, if the US saved a higher % of income, it would lead to Americans spending a lower amount on imports, which would also help reduce the US current account deficit.