Readers Question: Should Greece pull out of the euro ? They are in the fifth year of recession despite EU bailouts – it seems like pouring money down a black hole.

Yes. I believe they should leave the Euro. I put some arguments for and against here – Should Greece leave the Euro. Leaving the Euro will cause economic turmoil, especially in the short-term and it is hard to predict exactly how bad it will be. But:

The Greek public apparently want to keep the euro but they don’t want to pay for it.

Yes. They wanted benefits of Euro, but lacked both competitiveness and fiscal discipline.  They also don’t wont the austerity, job losses and continued depression which is a consequence of being in the Euro. If I was Greek, I would be angry that we ever joined the Euro. The Euro has made all of Greece’s problems worse.

Wouldn’t it just be easier to default on their debts and reinstate the drachma at a lower value than the euro ? This would boost exports and invite Tourism though I’m not sure what manufacturing Greece has to export.

Yes, Greek exports are relatively limited. But, a significant devaluation would create new opportunities. If nothing else, a devaluation would encourage foreign holidays, which would be now cheaper. For Greeks, it would make foreign goods less attractive and boost domestic demand instead. Don’t forget Greece has had a current account deficit of over 10% of GDP for a few years (currently around 9% of GDP) – This indicates a massive misalignment of currency. (UK is 2-3% of GDP by comparison) 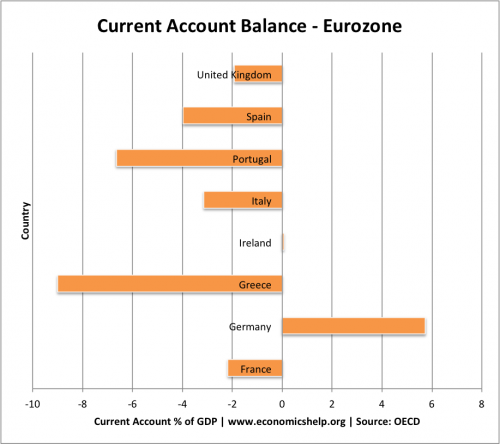 Leaving the Euro, would help realign Greek competitiveness and boost domestic demand – even if they don’t have significant export industries.

If they defaulted could they be made to repay their debts at some point anyway or could they just declare themselves bankrupt like an individual and pay back little or nothing ? How does it work ?

They have already partially defaulted. If they leave the Euro and replace with a new currency, they would repay part of the debt, but it would be in the new currency. Therefore, after the devaluation, people holding Greek bonds would see a fall in the value because of the devaluation. Countries have defaulted on debt before, but have been able to regain some kind of prosperity, e.g. Argentina.

If an individual goes bankrupt they generally cant have a bank account or credit for years but surely that wouldn’t apply to a nation.

People would be much more reluctant to buy bonds from a country with history of default. They can expect higher interest rates. But, who wants to lend to Greece at moment anyway? Again, Argentina defaulted in the past, but it is now borrowing again. If the fundamentals of the economy are sound, then some investors will be willing to lend, at least for a risk premium.

Readers Question: I here of large withdrawals of euro by Greeks from their banks in panic but whats the point in that if they are not actually going to leave Greece ? They would still have to convert to drachma anyway.

If Greece leaves the Euro, it will see a 40-50% devaluation in the currency. Therefore, if you have Euros in Greek bank account, these savings will be worth a lot less after the devaluation. Therefore, people would rather keep the Euros.

If they are afraid the banks will run out of money they are themselves hastening it.