Yes, the real interest rate is the most important factor.

Higher real interest rates tend to lead to an appreciation of the currency. This is because high-interest rates mean saving in that country gives a better return. Therefore investors often move funds to countries with higher interest rates. (this is known as hot money flows)

Effect of increasing interest rates on the value of the currency

However, as well as the nominal interest rate, it is also important to look at the inflation rate.

Higher inflation tends to lead to a depreciation in the value of a currency. With high inflation, goods become less competitive so demand falls relative to other countries with lower inflation rates.

Suppose you have two countries:

Ceteris paribus, it would be more advisable to invest in Singapore, which has a positive real interest rate of 1%.

Why not invest in India, where you get an 8% interest rate? If you put your money in India, you would get a good interest rate of 8%, however, with inflation of 8%, you would expect the Rupee to devalue by 8% a year.

In Singapore, you would get a lower nominal interest, but the Singapore currency would only depreciate by 4%.

(note inflation of 4% doesn’t mean a currency will exactly fall by 4%. But, if we exclude other factors, higher inflation tends to depreciate the value because goods are becoming less attractive. This is a simplification to help understand the concept) 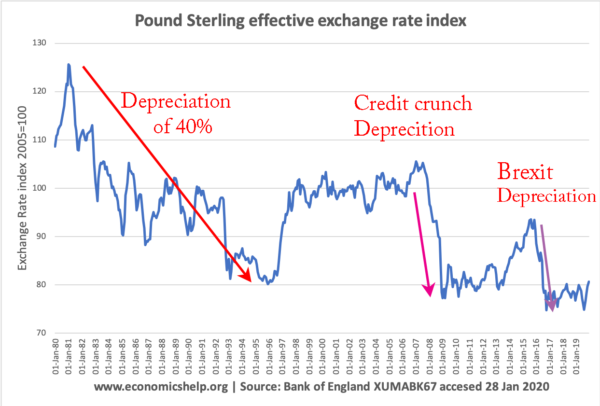 This led to a rapid depreciation of 30% in 2008. It is important to note that the depreciation was not just due to lower interest rates. The Pound started falling before interest rates were cut. The credit crunch and financial crash of 2008 hit the UK economy hard because the UK is more reliant on the financial sector than other economies. Nevertheless the cut in interest rates to 0.5% definitely didn’t help the Pound.