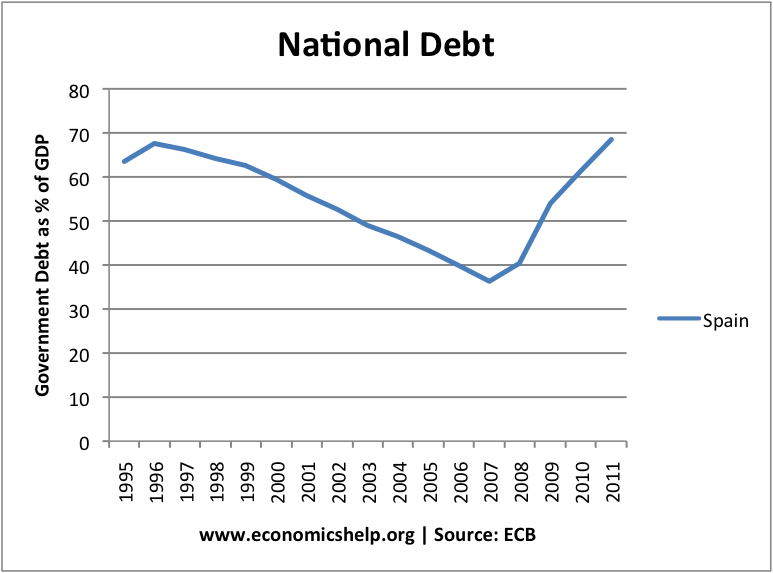 By European and international standards, this is actually quite low. National debt in Italy is 120% of GDP. In France government debt is higher at 80% of GDP

Spanish debt is actually quite close to German national debt, which is at a similar level 70% of GDP.

At the start of the crisis, Spanish government debt was very low by international standards. Admittely, these figures included property tax receipts which would soon dry up. But, the Spanish crisis was not caused by profligate government spending.

Bond yields in Spain have since increased above 7%. ECB long term interest rates (

Why has Spanish Debt been Downgraded to one Notch Above Junk status? (Moody have rated Spain as Baa3) Why Have Spanish bond yields crept above the ‘dangerous’ level of 7% ?

The government deficit was

Therefore, there was a rapid rise in the governments borrowing requirement.

By 2012, austerity measures had reduced Spanish debt to a level which is usually quite respectable.

In 2012, Spanish budget deficit is much lower than UK and US. However this has failed to reassure investors who are worried about future debt arising from private sector debt. 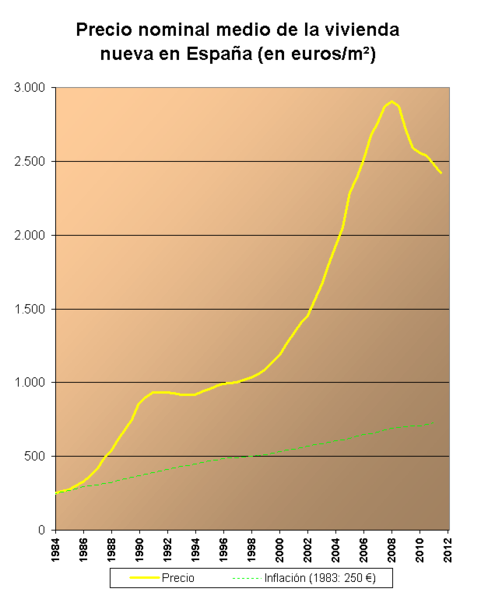 Spain had a decade long boom in house prices. This was matched by a boom in house building. Since 2008, Spanish house prices have fallen and repossessions increased. This has caused significant losses for Spanish banks which lent mortgages and funded the construction of houses that now can’t be sold. The concern is that with a big oversupply of housing, prices will fall further and banks sustain even bigger losses.

Due to losses resulting from the housing bubble and bust, Spanish banks are increasingly asking for a bailout from the government. For example, Bankia requested €25billion from the government on 29 May. Revised figures for 2011, show Bankia has a €4.3 billion hole in its balance sheet. But, there are concerns it could be worse than first thought. (Spanish banking crisis)

Austerity  measures, house price falls, and an overvalued exchange rate have all contributed to pushing Spain into recession. This fall in real GDP, increases the real burden of debt and makes it difficult for both the government and private sector to pay back it’s debt.

The uncertainty over the Spanish financial sector and prospects for growth mean that foreign investors do not want to buy Spanish bonds. Therefore, this has pushed up SPanish bond yields to a level which makes it very expensive for the government to fund its debt.

So far, Spanish consumers haven’t lost faith in Spanish banks, but it appears that foreign investors have.

6. No Lender of last Resort

The loan of €100bn Euros did little to appease market sentiment. Unlike UK or US, Spain can’t rely on a Central Bank to purchase bonds and avoid liquidity shortages.

The problem is that in the Eurozone, Spain has little room for manoeuvre. Despite unemployment of 25%  (and even higher youth unemployment), they are still trying to cut spending in an effort to deal with the budget deficit. However, this has pushed the economy into recession, and prolonged recession has worsened Spain’s fiscal prospects.