Skip to content
How much fiscal adjustment (austerity) have Eurozone economies pursued?
Underlying Primary Budget Balance in selected Eurozone economies
OECD Economic Outlook June 2012 | Balance of Power in Eurozone – mainly Macro
An interesting graph showing the change in the underlying primary budget deficit. It shows the extent of austerity measures pursued in economies such as Greece, Italy and Spain.
A primary budget deficit ignores debt interest payments. A big problem for Italy and Spain is that with bond yields close to 7%, their actual deficit is mostly spent on paying interest payments.
This is why common Eurobonds would help. Countries like Italy actually have a good underlying primary budget deficit, but are being harmed by the exorbitantly high interest rates.
The underlying deficit is cyclical adjusted. In other words it accounts for the increased borrowing arising from recession. The problem is whether these economies can actually get out of recession, given the straight-jacket of the Euro. 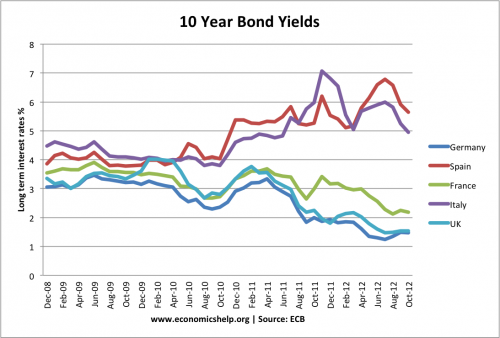 The problem with rapid fiscal adjustment is that it has caused a double dip recession, and therefore falling tax revenues. This has caused a decline in tax revenues and made markets nervous about prospects of reducing debt to GDP ratios.