There can be economic growth with zero inflation. This could occur if there was improvements in productivity, which caused lower costs and higher output at the same time. If you take a particular sector of the economy, such as IT / Computers. This sector has shown that you can have growth in output with falling prices. The key factor in this sector is the rapid improvement in technology.

If this IT sector was repeated across the board, in theory, we could have economic growth with zero inflation or even negative inflation.

If prices were falling, but output increased then, in theory, you could have economic growth without an increase in the money supply.

From a simple diagrammatic viewpoint, we would show the Long-Run Aggregate Supply Curve LRAS shifting to the right.

An AD/AS diagram showing an increase in AD and AS leading to economic growth with a constant price level.

How Practical is the idea of Economic Growth and zero Inflation?

1. Firstly, the kind of productivity growth we see in the computer / IT industry is unlikely to be replicated in other sectors of the economy – especially the service sector. Improved microchips can improve productivity in computers, but it’s hard to see the same improvement in productivity from cutting hair or selling bananas.

3. Wages sticky downward. Even when we have entered a recession, and experienced a significant output gap, we see that usually inflation remains stubbornly positive. Workers resist nominal wage cuts. Prices and wages continue to rise by small amounts because that is what people expect.

4. Easier for Prices / Wages to Adjust. It is argued that modest inflation of 2% makes it easier for prices and wages to adjust. If some prices / wages need to fall in real terms, they can be kept at 0%. This nominal price / wage freeze is psychologically easier than cutting nominal wages.

5. Impact of zero inflation / deflation on spending and debt. Zero inflation is likely to cause many problems associated with deflation. For example, if you expect modest inflation of 2% to steadily reduce value of your debts / mortgage, then zero inflation would increase your real debt burden more than expected. This period of zero inflation could cause a fall in consumer spending leading to negative economic growth. 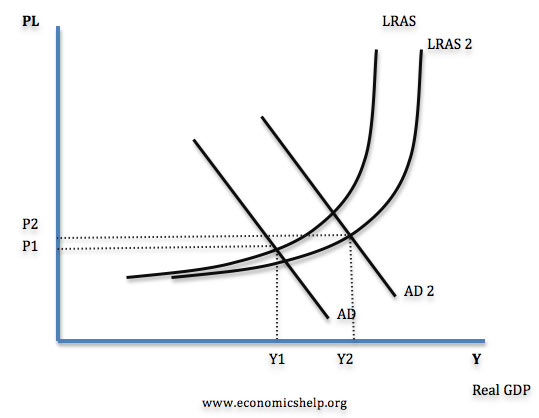 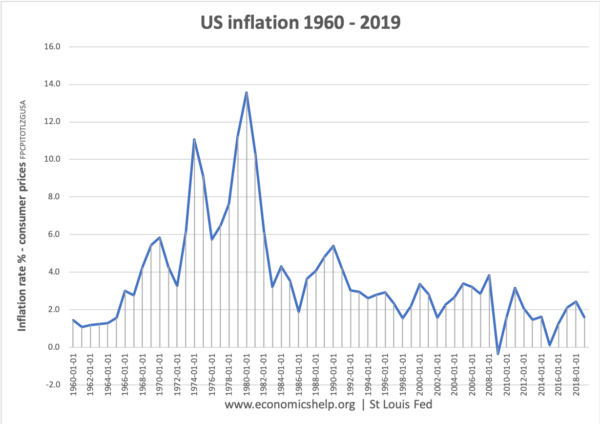 The US has had constant inflation in the post-war period. The only time of zero inflation was a time of recession/low growth.

Japan has had zero inflation for much of 1990s and 2000s, but it has had much lower growth than usual.