For the past few years, it has felt a bit repetitive always asking the same question – why can’t the EU policy makers see unemployment, social exclusion and rising poverty as the real challenge facing Europe? In the current climate it is not bond yields, inflation targets or levels of debt that are the real threat to European stability. The real threat is from rising unemployment, declining living standards and increased inequality. But, whilst EU policy tinkers at the edge, it has seemed to ignore the more pressing problems of the real economy.

After being rather dismissive of the EU policy for economic growth for 2013, a recent report on Employment and Social Developments in Europe 2013 is much more encouraging. 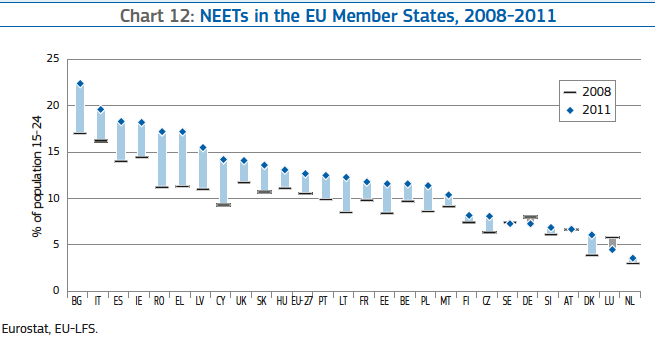 Firstly, there is a clear recognition of some of the real problems facing Europe. Rising unemployment, social exclusion and inequality. The above graph shows levels of NEETs

NEETs – stands for Not in Employment, Education or Training. It is a guide to the number of people without work, but also lacking any positive action to get back into work. It is a situation that can easily lead to demotivation, and when concentrated amongst young people, cause social unrest. 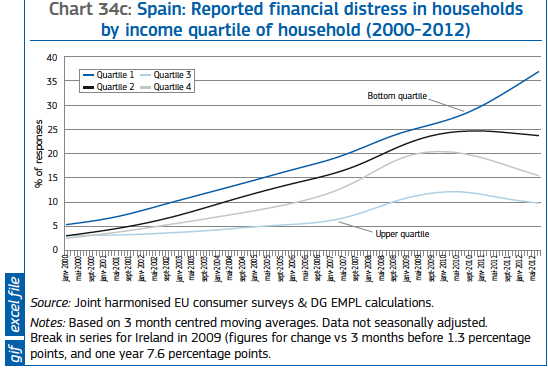 Spain has been hit the hardest by the Euro crisis. But, within Spain, this graph shows the levels of financial distress are clearing affecting the poorest the most.

Inequality of Economic Growth within Europe 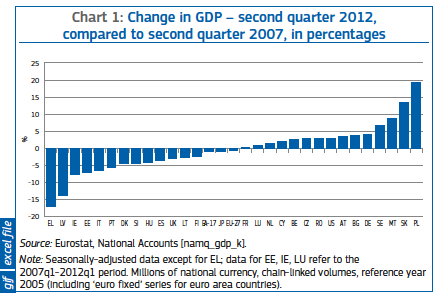 The EU recession has hit some economies much more. Between 2007 and 2012, Polish GDP increased by nearly 20%. Whilst in Greece (EL) GDP fell by 17%. Latvia and Estonia (often held up as examples to support austerity showed big falls in GDP – as well as having persistently high unemployment).

The report makes clear that the unemployment issue is a combination of demand and supply side issues. There is no attempt to brush off fiscal consolidation as not being a cause.

“Since 2011, the economic slowdown has gradually turned into recession in the EU, as the escalation of debt crises in several Member States led to significant policy shifts toward sharp fiscal consolidation by and large across the EU with adverse effects on aggregate demand. As a result, the previous timid employment growth has come to a standstill in the recent quarters and unemployment has reached levels not seen in more than a decade.”

There is also a recognition that a strong welfare state can mitigate the impact of a recession, but welfare states are under threat throughout Europe.

Five Key Points at Not the Treasury View

Now save the Poor – Ambrose Evans at the Telegraph

US vs EU unemployment