The EU has recently entered a double dip recession, with southern Eurozone countries particularly badly affected. As a consequence of the recession, EU unemployment continues to rise. Over the last twelve months, the number of unemployed people has increased by 2 million,
to reach more than 25 million. The unemployment rate is up to 10.6% in the EU and 11.6% in the euro area. 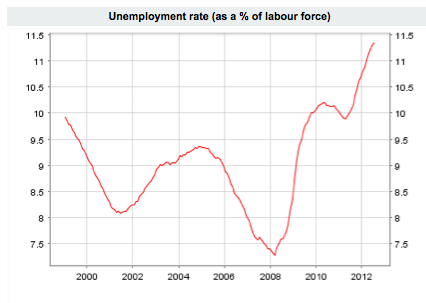 To restore economic growth, the EU has produced an Annual Growth Survey 2013 to try and deal with these issues. They have suggested concentrating on:

The EU report states that, in recent years,  sovereign debt in the EU has increased from 60% to 90% of GDP, and therefore debt levels need to be reduced quickly. However, they admit that fiscal consolidation (tax increases and spending cuts) might lead to lower growth. However, they argue that some types of fiscal consolidation may have a smaller negative impact on economic growth. For example.

2.Restoring normal lending to the economy

The recession, credit crunch and sovereign debt crisis has caused a fall in bank lending, the EU hope to improve lending through certain initiatives such as – more money for the European Investment bank, greater use of EU structural funds, and greater efforts to co-ordinate the recapitalisation of commercial banks.

Promoting growth and competitiveness for today and tomorrow

This involves supply side policies, such as increasing competition in transport, encouraging investment in broadband internet technology and greater spending on R&D.

These supply side policies are well meaning, but it will take a long time to have an effect. Also, there is no mention of the more fundamental competitiveness issue occuring from membership of the Eurozone.

Tackling unemployment and the social consequences of the crisis

This involves supply side policies for dealing with labour market inflexibilities and mismatch of skills. It involves policies, such as greater flexibility (e.g. easier to hire and fire workers), evaluating whether minimum wages are too high, spending money on education and training to improve skills of the long-term unemployed.

The EU definitely has issues with structural unemployment arising from mismatched skills and inflexibilities in labour markets. THerefore, there is scope for tackling some of this unemployment. However, the significant rise in unemployment in recent months and years is due to deficiency of aggregate demand and the on-going recession. Supply side policies will not solve this type of unemployment

There are good ideas in the growth pact of 2013. There is scope for reducing structural unemployment with suitable supply side policies; some types of fiscal consolidation may have less impact on economic growth.

However, the overall package misses the essential component which is a deficiency of aggregate demand within the Eurozone (and especially the south). Changing the nature of fiscal consolidation is not really going to help. Within this document for growth, there is no mention of:

One of the greatest ironies is that the EU state their policies for 2013 are the same as 2012. Yet, there is no recognition that in the past 12 months, there strategy is woefully inadequate.

3 thoughts on “EU Policies for Economic Growth in 2013”