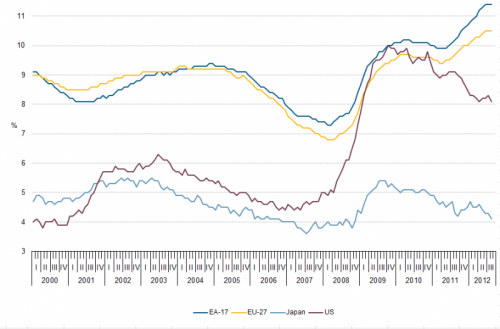 Recent unemployment data from the US shows a sharp fall in the unemployment rate. EU unemployment remains stuck at 11.4% – the highest since the introduction of the Euro in 1999. The diverging unemployment rates highlight the different stages of economic recovery between the two economic zones. However, sluggish EU recovery and a continued EU debt crisis could be a major drag on US recovery. On the other hands, signs of US recovery is good news for the rest of the global economy.

Reasons for Divergence in Unemployment Rates

1. Economic Growth. The US has seen a relatively weak economic recovery. But, growth has been positive leading to higher employment levels. The Eurozone, by contrast, has entered into a double dip recession.

2. Fiscal Tightening. The Eurozone has been seeking to meet deficit reduction targets. These deficit reductions have had a big impact (negative multiplier) effect. The US has not pursued spending cuts of any significance. See: Austerity and fiscal multiplier.

3. Flexible Labour market. The recession caused a faster increase in unemployment in the US because the labour market is relatively more flexible. It is easier to hire and fire workers in the US economy compared to Europe where there tends to be greater job security.

4. Monetary Policy. The Fed Reserve have pursued quantitative easing – buying bonds to keep down long term interest rates and increase money supply. Though Q.E has had limited impact, it highlights the difference between US monetary policy and EU monetary policy – where as recently as 2011, the ECB were increasing interest rates because they were worried about inflation.

EU vs US economic Growth