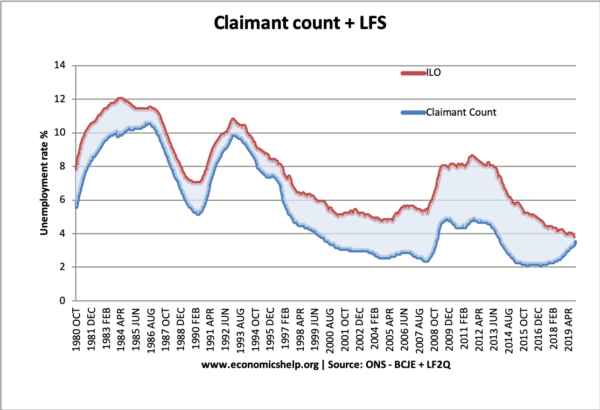 Explaining changes in unemployment since 1980

Unemployment rose to a post-war peak in 1982 (12%) due to the recession of 1981. The unemployment was concentrated in former industrial areas, which suffered from falling output during the early 1980s. Unemployment did not fall below 3 million until the mid-1980s, when the economy started to boom. Another recession in 1991, caused another rise in unemployment to over 3 million (10%).

During the long boom of the late 1990s and 2000s, unemployment fell to a low of 5%. This was near full-employment. In 2008, the deep recession caused a sharp rise in unemployment due to people being laid off in the recession.

Why has unemployment fallen during the prolonged recession of 2008-14?

The great recession of 2008-13 includes one of the most sustained falls in GDP. (See: Great recession 2008-13) Yet, despite the extent of the fall in GDP, unemployment peaked at 8.5% and since 2011 has fallen. This fall in unemployment has surprised some economists because the economy has remained weak, with economic growth stagnant. In a less severe recession, unemployment rose by more. The lower unemployment in this recession is due to several factors:

Youth Unemployment in the UK 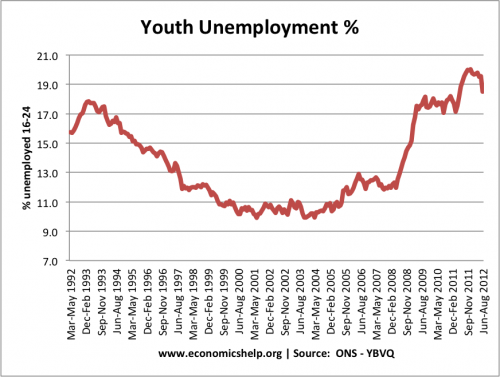 Trade-off between unemployment and inflation