Readers Question: To what extent do the official UK figures for unemployment accurately reflect economic reality?

The unemployment rate measures those who are officially seeking work but unable to find employment. 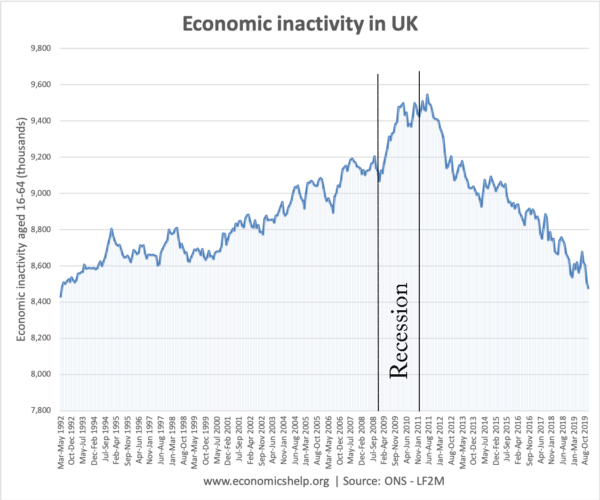 The OECD produced a report in 2019 that if the economically inactive are included – the ‘true level of unemployment rate would rise from 4.6% to 13.2% of the working-age population, not in education’. (link)

Is it fair to include the economically inactive in unemployment?

It is an interesting question of whether the inactive should be included in definitions of unemployment. Most international definitions state a person is unemployed only if they are actively seeking work and unable to find it.

However, it may be that an unemployed worker becomes demotivated by the state of the job market. After a few years of failing to gain employment, they ‘give up on the labour market’ and state they are no longer looking for work but sign on for alternative benefits. If the labour market improved (better jobs and better pay), they would be inclined to re-enter the labour market and actively seek work.

However, the economic inactive may genuinely have no desire or ability to work. They may be incapacitated by sickness or disability, prefer to take early retirement or choose to live on a lower income. If someone is inactive they may or may not have any intention to work.

The labour force is a better guide to unemployment because the claimant count only includes those eligible for benefits.

Another factor to consider is the extent of disguised unemployment. This is when people are not counted as unemployed, but they may be moved on to sickness/disability benefits or work only part-time rather than full time. It can be useful to look at employment statistics as well as unemployment rates.

The claimant count suggests we are close to full employment. However, despite these figures, there are many reasons to suggest that this is an underestimate of unemployment.

The JSA excludes many groups of people from claiming unemployment benefit, even though they are actively seeking work. Examples include:

The claimant count is not a good guide to measuring the real scope of unemployment because many are counted as unemployed, but they are not eligible for benefits.

The Labour Force Survey is done according to internationally agreed criteria by the ILO. This survey is a monthly questionnaire of 60,000 people. It asks them whether they have been actively seeking work and would be able to take work if offered. The ILO method gives a significantly higher figure ( currently  1.69 million  Dec 2015) It is worth noting that the ILO questions stick close to the common economic definition of unemployment (actively seeking work) Therefore, this would be a better approximation of unemployment levels in the UK.

This is despite the potential for sampling errors in a survey of 60,000 people; also, people may not tell the truth.

Other factors which influence true levels of unemployment

In recent years there has been a marked increase in the number of people receiving sickness or disability benefits. These people used to be employed, but, for various reasons are no longer able to work. Rather than be classed as unemployed, they have effectively left the labour force. In one sense, they are not unemployed because they are not seeking work. However, on the other hand, you could argue this economic inactivity is a type of unemployment. Perhaps under different circumstances, they could be working. Often sickness benefits disguise the extent of unemployment in certain areas. For example, many former miners were given sickness benefits, rather than be classed as unemployed when the mines closed down.

On the other hand, the rise in female participation rates has increased the levels of economic activity.

Disguised unemployment occurs when people do not have productive full-time employment but are not counted in the official unemployment statistics.

For example, a person may want to work 40 hours a week. However, he might only be able to find part-time work. Therefore, he is not classed as unemployed, but at the same time, he doesn’t have a full-time job – we could say he is underemployed.

An OECD Report in 2019 stated that if a measure of economic activity is used – the total number of people out of a job who could work would rise from the official level of 1.3 million to almost 4.5 million.

The OECD measure of economic activity would include as unemployed people who do not work and refer to themselves as inactive because they feel no jobs are available. For example, people caring for family and people with health issues.

It is also possible that some people counted as unemployed are actually working. It is possible that people receive benefits but still work for ‘cash in hand’

However, the criteria are quite strict. Also, the Labour Force survey doesn’t rely on the numbers receiving benefits.

This is due to factors such as

10 thoughts on “The True Level of Unemployment in UK”