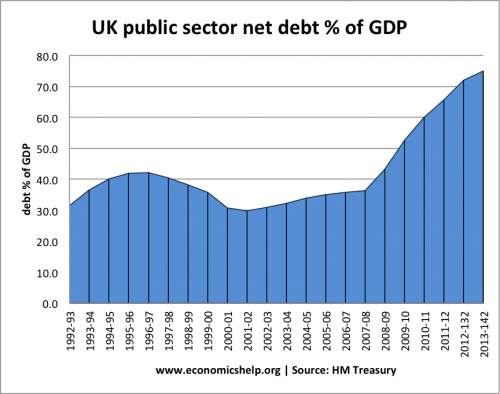 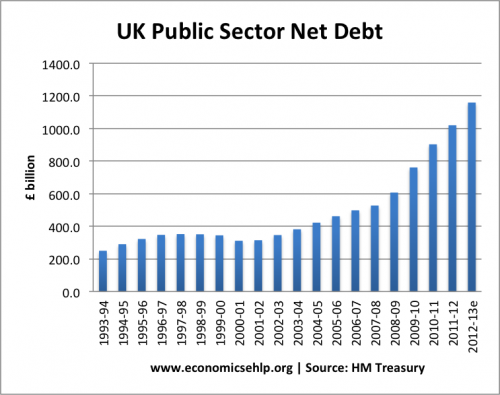 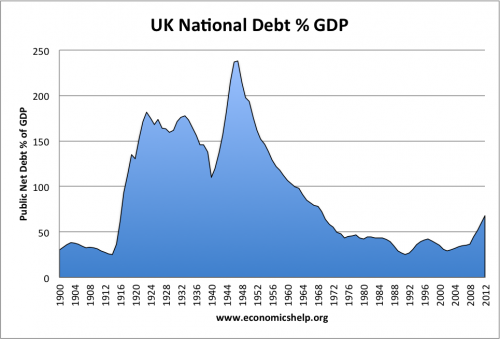 The level of Net government borrowing at 2011/12 prices 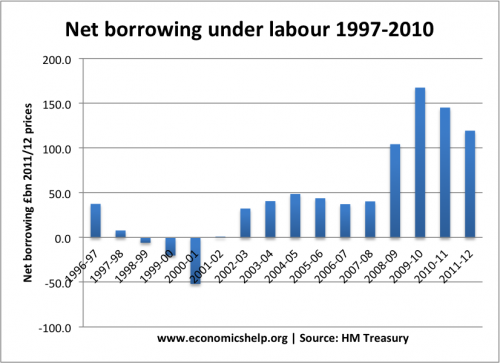 Government borrowing as a % of GDP. 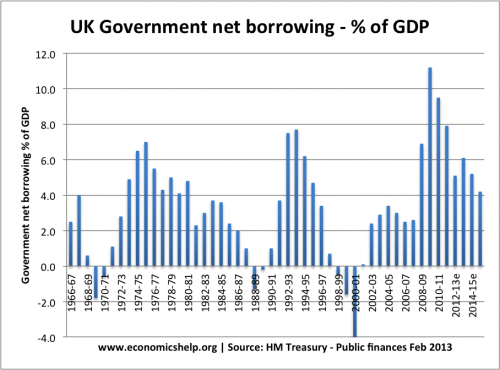 At the start of 2007, there were few economists expressing concern at government debt running at 36% of GDP. By post-war standards, UK government debt was very low and the government appeared to be meeting its own reasonable fiscal targets.

Given the period of strong economic growth, it is unsurprising that Labour wished to increase spending on health care and education. If the financial crisis hadn’t materialised, we may have looked back on the great moderation with kinder eyes.

However, a critic would point out that we did have a financial crisis and running a budget deficit during an unsustainable economic boom was irresponsible. In retrospect, Labour would have been better reducing the public sector debt further. This would have given the government even more room for manoeuvre during the crisis of 2008-12. Also, with growth strong, this was the best time to reduce the budget deficit. The mantra of Keynesians during the crisis has been – a recession is the wrong time to reduce a budget deficit. Given high growth in the 2000s, it would have been better to be stricter with public spending. Even countercyclical fiscal policy measures such as higher income tax, higher stamp duty may have reduced the housing and financial bubble and made the subsequent crash less dramatic.

This is a fair point. It was a mistake to be running budget deficits of 3% of GDP towards the end of the boom. However, the mistake is relatively minor. The boom was in finance and housing; inflation was running low (unlike say the 1980s boom) Most of the economic profession never saw the extent of the forthcoming recession. From a macro perspective, it didn’t look like a  classic boom and bust (high growth and inflation)

Of course, it is easier to be wise after the event. If we were more aware of the dangers inherent in the financial system, we should have exercised much more caution. But, when looking at the causes of the great recession – government spending levels and budget deficits of the preceding years bear little if any cause.

It is also worth noting that when the recession hit, the government did initially pursue expansionary fiscal policy – there was no panic in the bond market. Bond yields have fallen throughout the crisis. Although debt increased rapidly, there was no danger of a fiscal cliff, like say Greece.

The switch towards austerity post-2010 was largely a self-created panic. Part of the motive for austerity was the desire to paint a grim picture of public finances. The problem is that economic pessimism can become self-fulfilling. A more balanced view of the overall state of public finances in 2010 would have led to less rash policy.