How will Coronovirus affect the National debt?

Coronavirus caused an economic shutdown in 2020 with certain sectors continuing to show lower growth. Although some sectors are recovering strongly. Government finances have been hit negatively.

The government will have to spend more on:

Can the government pay for the emergency measures?

In WWII, in one year, the government borrowed 27% of GDP. We are heading for a similar effect. The higher government spending can be financed by

See: How can the government pay for emergency crisis spending?

Comparison with other countries

History of the national debt

These graphs show that government debt as a % of GDP has been much higher in the past. Notably in the aftermath of the two world wars. This suggests that current UK debt is manageable compared to the early 1950s. (note, even with a national debt of 200% of GDP in the 1950s, UK avoided default and even managed to set up the welfare state and NHS. In the current climate, the UK would struggle to borrow the same as in the past.  For example, private sector saving is lower, and the US wouldn’t give us a big loan like in the 1950s.

The post-war levels of national debt suggest that high debt levels are not incompatible with rising living standards and high economic growth.

The reduction in debt as a % of GDP 1950-1980 was primarily due to a prolonged period of economic growth.

Since 2007, UK bond yields have fallen. Countries in the Eurozone with similar debt levels have seen a sharp rise in bond yields putting greater pressure on their government to cut spending quickly. However, being outside the Euro with an independent Central Bank (willing to act as lender of last resort to the government) means markets don’t fear a liquidity crisis in the UK;  Euro members who don’t have a Central Bank willing to buy bonds during a liquidity crisis have been more at risk to rising bond yields and fears over government debt.

The cost of National debt is the interest the government has to pay on the bonds and gilts it sells. In 2011/12, the debt interest payments on UK debt are anticipated to be £48.6 bn (3% of GDP). This is a sharp increase from two years ago, but still quite manageable.  See also: UK Debt interest payments

As a % of GDP, debt interest payments are relatively low.

The era of low interest rates post 1992 has helped to reduce UK debt interest payments as a ratio of government revenue.

However, government borrowing is not always as bad as people fear.

The majority of UK debt used to be held by the UK private sector, in particular, UK insurance and pension funds. In recent years, the Bank of England has bought gilts taking its holding to 25% of UK public sector debt. 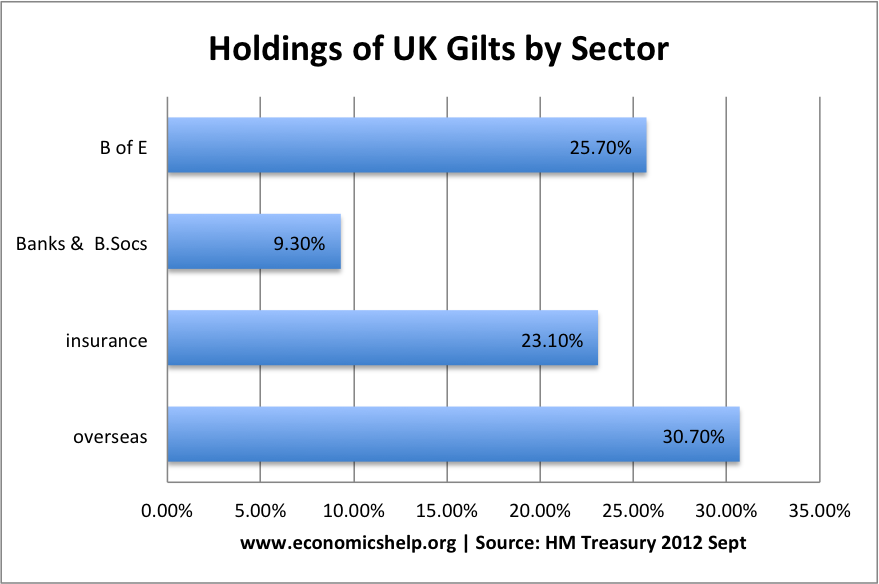 More at: who owns UK debt?

How to reduce the debt to GDP ratio?