A graph showing net lending (+) and net borrowing (-) by sector in the UK economy.

You could also think of it as happening the other way, as the government borrow more, the private sector spend less and become net lenders.

But, in the recession, I think what is happening is that we are seeing a rise in the household savings ratio, and firms are increasing their cash reserves. Banks have also gone from net borrowers to net lenders. In this climate of depressed private sector spending and investment, it is to be hoped the government will step in and spend by borrowing from a private sector that want to save and pay off debts.

In 2012 Q2, there must have been a temporary surve in borrowing by financial corporations. 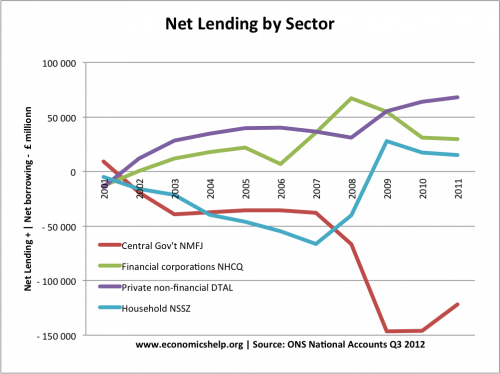 1 thought on “Net lending and borrowing in UK by sector”