Readers Question: What caused the massive decrease in the debt to GDP ratio for the UK following World War II?

It is a good question to ask. In the past few years, many European policymakers have felt that rising debt levels needed panic levels of austerity/spending cuts. But, that didn’t happen in the UK in the post-war period.

In the past eight years, debt has increased to 80% of GDP but is beginning to stabilise.

The main reason UK debt to GDP fell in the post-war period was the sustained period of economic growth and near full employment until the late 1970s. This growth saw rising real incomes which in turn led to higher tax revenues and falling debt to GDP ratios.

There was also a positive inflation rate, which helped erode the real value of debt.

Firstly, debt to GDP was definitely not reduced through cutting government expenditure.

Why did UK debt to GDP fall?

This graph also explains the sharp rise in debt as a % of GDP 2007-2013 – real GDP stagnated and stopped growing.

Inflation helps reduce the real value of debt. This occurred in the 1970s. Though interest rates did rise in the 70s to give some compensation to bondholders.

What caused economic growth in the post-war period?

UK growth was so rapid, the economy experienced labour shortages. This led to the mass immigration of the 1950s and 60s to help deal with the labour market shortages. This helped increase the working population and increase real GDP. GDP per capita rose at a slower pace than actual real GDP.

In the post-war period, there was a growth in university education, and secondary education became more comprehensive.

One of the cornerstones of William Beveridge’s Welfare proposals was the assumption that a comprehensive welfare state required considerable efforts to achieve near full employment. The UK experienced boom and bust cycles, but the downturns were relatively minor, and there were no real recessions of any significance until 1973.

In the post-war period, the government controlled monetary policy and fiscal policy and had a willingness to cut interest rates during economic slowdowns. The benign global economic conditions helped give a low trade-off between inflation and unemployment.

UK growth could have been higher

Many commentators state that although the UK did enjoy a post-war economic boom, it was actually a missed opportunity and our relative competitiveness declined. The UK had many failings such as

With income tax rates of 70% plus. Rising incomes will lead to significant increase in tax revenues for the government.

There was more effort to tax capital. In 1965, James Callaghan, the then chancellor introduced capital gains tax of 30pc to stop people avoiding income tax by switching their income into capital.

Tax revenue was regularly over 40% of GDP. 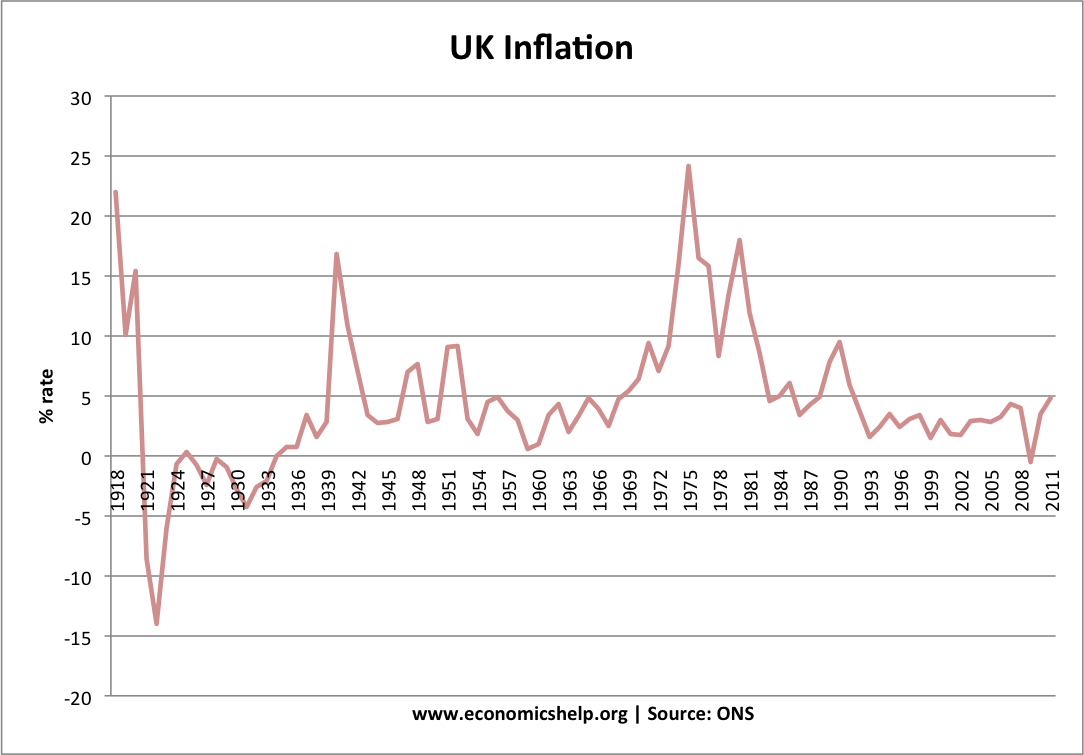 Inflation played a role in helping to erode the real value of debt. In the post-war period inflation was averaging 3-5% – with periods of near double-digit inflation. 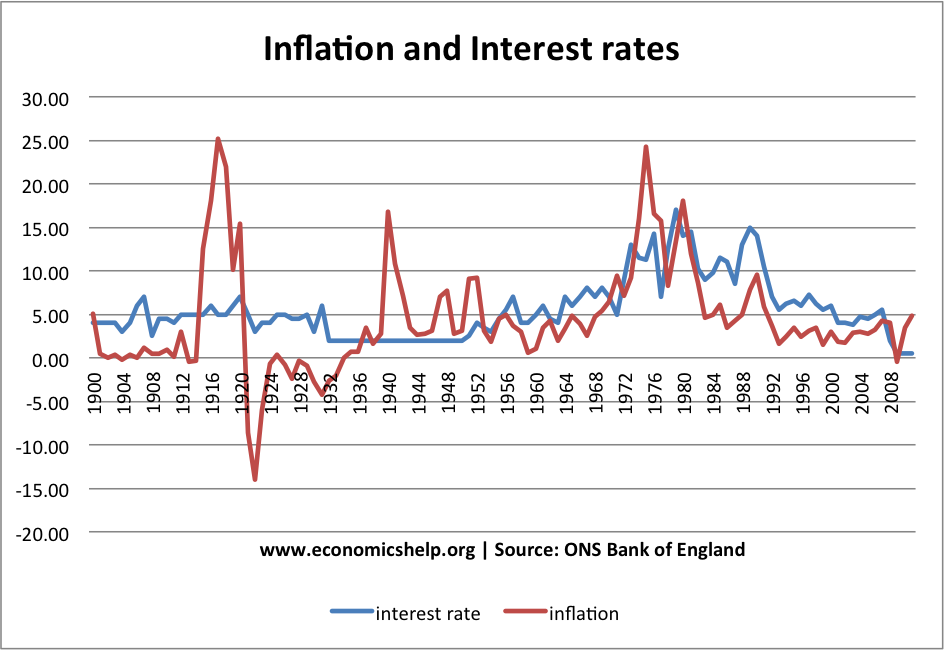 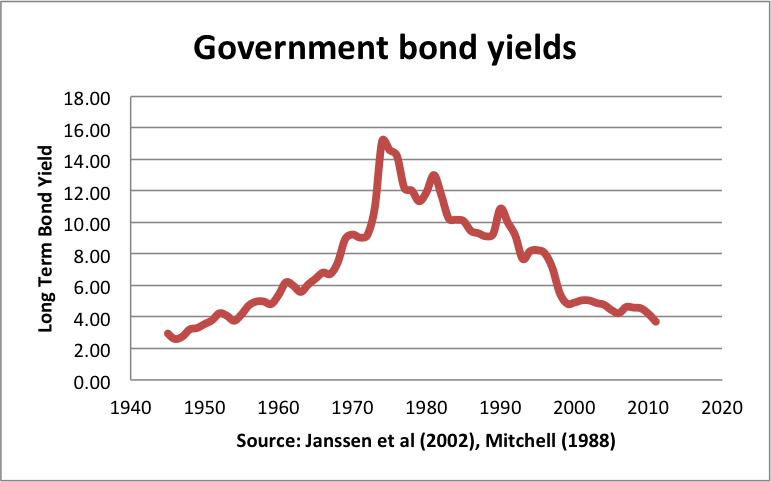 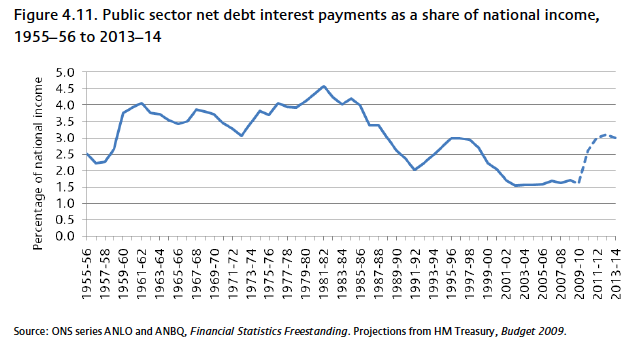 The fall in UK national debt as a % of GDP reflects one of the important issues regard to debt reduction – take care of economic growth and unemployment and this will play a considerable role in reducing debt to GDP ratios.

The UK experience of the 1950s and 60s is in complete contrast to the current European experiment of sacrificing growth to meet deficit reduction targets – the result being often rising debt to GDP ratios in Europe.

However, it is worth bearing in mind, the post war period is often referred to as the ‘golden period of economic expansion’. The UK was helped by several factors which enabled it to borrow such a large amount. These factors included:

In the current climate many of these factors are not there.

Burnt by the credit crunch, investors are possibly more sceptical about government debt (though that hasn’t stopped UK bond yields falling to near record levels)

It is all very well saying all we need to do is to increase real incomes and boost economic growth, but in practise it might not be as easy as that.

Could the UK happily borrow 230% of GDP like in the late 1940s? – I don’t think so. But, when politicians tell you the only way to reduce debt is through painful austerity, you could remind them of the 1950s and 1960s when the opposite happened. The striking thing is the steady reduction in debt to GDP, whilst at the same time seeing real government spending levels rise.

Debt as % of GDP more important than budget deficit

One final point is that debt as % of GDP is a more important statistic than a budget deficit. Total debt reflects the long-term situation better than annual deficits which are influenced by cyclical factors.

(1) note there are different measures of government debt. But, whichever method you use, there is a broad decline in debt to GDP