UK net borrowing as % of GDP

Other sources of budget deficit figures

Factors that affect the size of the budget deficit

1. Economic cycle. During a recession, it is likely that there will be an increase in the budget deficit. This is because:

3. One-off Receipts. A governments budget balance may be improved through one off payments, such as receiving income from privatisation of state owned assets.

4. Structural deficit. If the government commit to investing in infrastructure, there will be higher borrowing. For example, higher government spending increased in the early 2000s contributing to an underlying structural budget deficit. 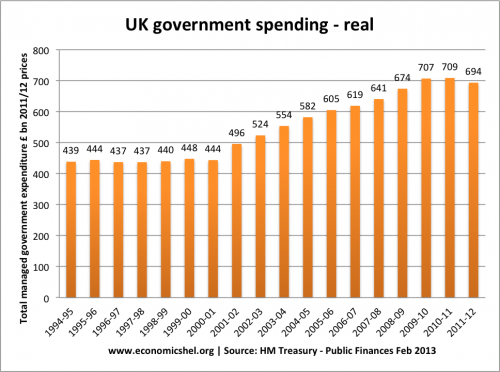 5. Fiscal Policy. Expansionary fiscal policy involves higher spending and lower taxes which will increase the size of the budget deficit.

Effects of a budget deficit

See more detail at: Effects of a budget deficit

During the 1920s, UK ran a budget surplus. This was a period of deflation, low growth and stagnant real wages. See – The economy of the 1920s