The main factors affecting the competitiveness of British industry will include.

1. Relative Inflation Rates. If the UK has a higher rate of inflation that its major competitors then our goods will tend to become relatively uncompetitive leading to a fall in demand.

This shows that between 2009 and 2013, UK inflation was above the EU27 inflation, therefore there was a decline in UK competitiveness in this period.

2. Exchange Rates. The exchange rate will have a significant bearing on the competitiveness of UK exports. A devaluation will cause exports to be cheaper and therefore improve competitiveness – at least in the short-term.

This shows that in 2008/09, the UK experienced a sharp fall in the value of the Pound by approx 30%. In theory, this fall in the exchange rate should boost competitiveness with UK exports becoming cheaper compared to imports.

3. Wage Costs. An important factor in the declining competitiveness of UK manufacturing goods viz a viz China is that the UK’s average wages are much higher than China’s. China is benefiting from an elastic supply of labour which is keeping wages down. In labour-intensive industries, such as clothing manufacture relative wage costs will be more significant than capital intensive industries, such as computer design.

4. Adoption of new technology Are UK firms able to innovate and invest in new technologies which are important for developing dynamic efficiencies? A report by the World Economic Forum suggested the UK was poorly prepared for upcoming changes to the economy

WEF report argued that Britain currently looks less prepared than some of its economic rivals to take advantage of rapid technological change, given weak rates of adoption of IT equipment, relatively poor provision of mobile and fibre broadband, and the relatively poor digital skills of the population (Britain falls in competitivenss, Guardian) 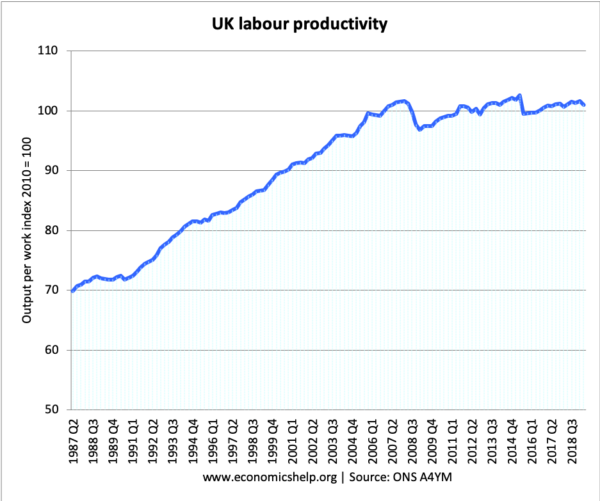 This shows international comparisons of productivity. It shows in the period 2008-2012, UK productivity growth is lower than France, Italy and the US, but better than Germany.

UK manufacturing is concerned that leaving the EU Single Market will result in higher tariffs and/or higher non-tariff barriers. This will increase costs for firms manufacturing goods in the UK but who rely on importing raw materials and parts from across Europe.

For some goods, price is only a small factor in determining competitiveness. For example, UK higher education may be costly for foreign students, but the reputation for the quality of education may exceed the price factor. The UK has relatively strong competitiveness in sectors like tv shows and film – where the quality of the product is more important than the price.

Evaluate the effects of a fall in the UK’s competitiveness?

There is concern that a fall in competitiveness can lead to structural unemployment. If UK industry becomes uncompetitive, then jobs will be lost. However, it is uncertain whether these newly unemployed workers will have sufficient skills and flexibility to retrain and gain employment in new sectors. A rapid fall in competitiveness does tend to cause at least short-term or structural unemployment.

A fall in competitiveness will put greater pressure on firms to cut costs. This may lead to lower wage growth and new jobs that are low-paid and temporary. A feature of the UK’s economic performance since 2008 has been stagnant wage growth – partly related to low productivity growth and declining competitiveness.

Lower competitiveness is likely to cause lower exports, higher imports and an increase in the current account deficit.

UK current account deficit has widened since 2010, despite weaker Sterling.