When interest rates were cut to 0.5% in March 2009, few would have expected them to remain at 0.5 until the present time. Yet, we have seen an unprecedented period of zero interest rates. There is much speculation about:

When will interest rates rise?

Essentially interest rates will rise when there are signs of a strong economic recovery, which is starting to cause the threat of demand pull inflation. The problem is that, over the past few years, the UK has seen many ‘green shoots’ of recovery which have failed to translate into a lasting recovery. In recent months, retail sales have improved – indicating some signs of recovery, but the EU recession is holding back recovery, creating a patchy picture. Policy makers will want to see annualised growth of 2.5% a year before there is greater confidence that the UK is leaving the this era of stagnant growth.

Important factors in signalling an end of zero interest rates

Signs of core-inflation. The main motivation for raising interest rates is to prevent a return of inflationary pressures. If core inflation (which strips out volatile factors) starts to increase above 2%, then there will be a strong case to increase interest rates. In Europe and US, inflation is actually falling to below 1.5%. The UK headline inflation rate is higher, but during the great recession, the Bank of England have correctly been suspicious of the CPI rate. It hasn’t a true reflection of demand pull inflation – more a reflection of cost-push factors.

Wage inflation. A key sign for a return to economic normalcy, will be an increase in real wages. Currently nominal wage growth is very weak. Many workers are seeing wage freezes. In this climate of real wage cuts, economic activity is depressed and the case for higher interest rates remains very weak.

Any sign of boom in the housing market. An increase in house prices could restart a round of higher spending, driven by the ‘wealth effect’ However, in the UK, house prices still look overvalued on ratios of house price to incomes. A fall in house prices may be more likely than rising house prices.

How much will interest rates increase?

This is an interesting question. Pre-crisis, ‘normal interest rates’ may have considered to have been 5% There is a widespread assumption that a return to trend rate growth of 2.5% and inflation of 2%, would see interest rates of 5% – giving us a more normal real interest rate.

However, as Mervyn King recently pointed out, many young homeowners have borrowed extensively to get on the property ladder.

On the other hand, it is worth bearing in mind, that many banks didn’t pass the full base rate cut onto consumers. 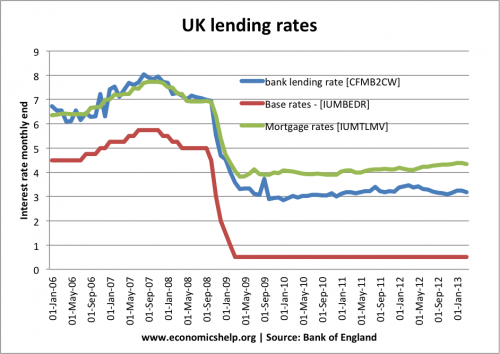 Therefore, if the Bank of England increase base rates by 2%, it is likely consumers will see their own base rates rise by a smaller amount. Also, an increasing number of householders have taken fixed rate mortgages, therefore there will be some insulation from rising rates.

Savers. It is popular to characterise the UK as a nation of binge borrowers. Good Hayekian economists like the BIS are despairing at the climate of low interest rates, which they assume is fuelling another credit bubble. 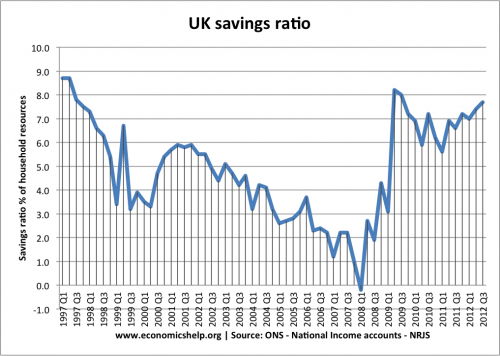 Fiscal policy. Given state of public finances, there is a strong pressure to keep fiscal policy tight – limiting spending increases, if not cutting spending. Given contractionary fiscal policy, it places more  burden on monetary policy to keep demand positive.

Europe. The European recession has deepened in recent months. EU unemployment has increased to over 12%. The recession in Europe is now holding back the UK recovery, delaying the time when interest rates will rise.

Conclusion – so when will interest rates rise?

Markets have started to assume interest rates will rise by the end of the year. But, despite recent hopeful signs, the UK and EU economy remain weak.  It will take until 2014, to be sure of any kind of more sustainable recovery. We are still dealing with the after effects of a balance sheet recovery. When recovery comes, most expect it to be relatively weak. There is no sign of a surge in consumer spending and house prices. With a weak recovery, interest rates may only need to increase slightly (2-3%) to have desired effect of keeping growth at a sustainable rate.