Who is your ‘favourite’ economist, why?

It may not be very original, but I would choose the man himself. John M. Keynes. 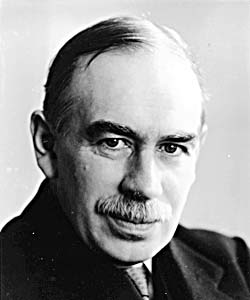 This is more interesting. Keynes was very practical. He saw a real crisis – the great depression, and he sought an effective solution. In looking for solutions he was willing to think outside the box and go beyond ‘classical’ orthodoxy. This showed an intellectual flexibility that many of his generation didn’t have.

Keynes has been misrepresented in many ways. For example, crude Keynesian economics can be characterised as ‘big government’ but it is not his fault people critics misrepresented or misunderstood his ideas.

Keynes examined the real social and economic disaster of the the great recession and also saw that it didn’t have to be like that.

On the downside, I find his books pretty turgid and hard to read.  He can take a long time to make his point. But, at other times (when not writing the General Theory) he was a great populariser. In my view, he was also right, which is a big plus.

Keynes wasn’t just about Keynesian economics. He made prophetic comments at the Versailles Peace Treaty where he criticised the Allies reparation payments arguing Germany would be bankrupted and it would lead to future resentment and war.

If we aim deliberately at the impoverishment of Central Europe, vengeance, I dare predict, will not limp.

He was also right in criticising the UK’s persistence with the gold standard in the 1920s and 1930s.

He also did an amazing job in US after the Second World War trying to negotiate a deal for bankrupt Britain.

Finally Keynes had a bit of style, you could say arrogance.

“No one in our age was cleverer than Keynes nor made less attempt to conceal it.”

But, by all accounts he had the intelligence to justify his supreme self-confidence. Even Hayek, his supposed intellectual adversary said of Keynes:

He was the one really great man I ever knew, and for whom I had unbounded admiration. The world will be a very much poorer place without him.

I’ve written a biography of Keynes here.
Which 1 book should everyone read to get an introduction to economics?

It’s always surprising difficult to pick out one book. But, this is good. The Economics Book