An essay on the economic effects of a falling dollar. 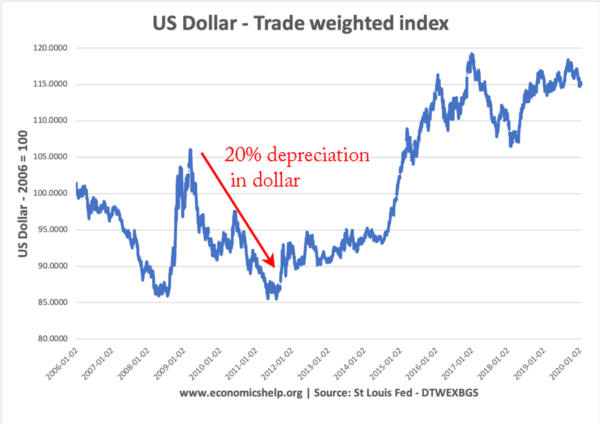 In summary, a fall in the value of the dollar will have these effects.

1. A boost in the US manufacturing sector

A lower dollar increases the price competitiveness of US exports. Cheaper exports will lead to an increase in demand. If demand is price elastic then there will be an increase in the value of exports.

A fall in the value of the US dollar could contribute to inflationary pressures. This is for a number of reasons.

2. Fall in imports/switch to domestic goods.

As a result of the fall in the dollar, US consumers will face increased prices of European /imported goods, so the growth in demand for imports will slow. It may encourage US consumers to switch to domestically produced goods.

Between 2006 and 2008, there was a significant fall in the value of the dollar. This period 2006-08 also saw a sharp improvement in the US current account. (It is worth noting the improvement was also caused by lower growth and less import spending)

4. A temporary improvement in US Economic growth and employment

With rising export demand this will help increase output and therefore there will be a reduction in unemployment. Also, with imports more expensive, this will increase the demand for domestically produced goods. Therefore, a fall in the value of the dollar can boost the rate of growth – especially if there is spare capacity in the economy.

5. Lower growth and lower inflation in US trading partners

If the US dollar falls in value, the Euro and Yen will appreciate. This will have the effect of causing

Inflation will be lower in the EU; this is because

3. Manufacturers have increased incentives to cut costs. Therefore a devaluation will help reduce EU inflation. This could cause a recession but evidence suggest EU growth is more resilient and the ECB have said a cut in interest rates is not necessary at the moment.

6. Pressure to devalue currencies linked to the dollar.

Some Latin American and Asian countries such as Thailand have a semi-fixed exchange rate against the dollar. Thus if there is a fall in the dollar, they will also see a fall in the value of their currency – helping their exports, though it could contribute to inflation.

It also depends on why the dollar is falling.