Interest rates determine the amount of interest payments that savers will receive on their deposits.

However, in the real world, it is more complicated. The link between interest rates and saving is not clear because many factors affect saving. 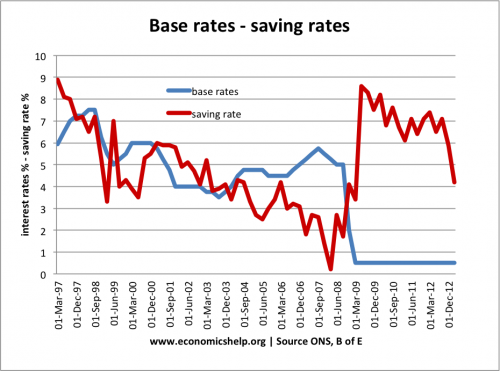 In 2009, the household saving ratio increased from 0.5% to over 8% – despite a cut in interest rates from 5 to 0.5%. This was because the impact of the recession encouraged saving. The fear of unemployment and recession was greater than the effect of lower interest rates

Usually, the substitution effect dominates. Lower interest rates make saving less attractive. But, for some, the income effect may dominate, and people may respond to lower interest rates by saving more to maintain their standard of living.

Alternatively, a lower interest rate may encourage other forms of saving and investment. With very low bank rates, it has encouraged people to look for better yields in the stock market. This is one reason why the stock market did well in the great recession of 2008-2013 – savers have been buying shares to get a better rate of interest rate than they can in a bank and on bonds.

Base rates and bank rates 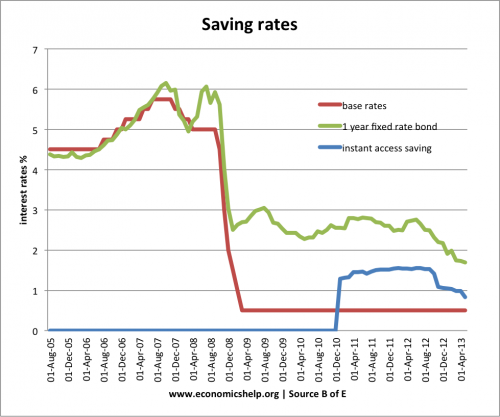 In 2009, the saving ratio rose sharply – despite a cut in interest rates.

The saving ratio (percentage of income saved) depends on several factors, including:

Higher interest rates also make it more attractive to save money in the UK, as opposed to other countries. Therefore, higher rates will cause ‘hot money flows’ and may cause the value of the £ to rise.

2 thoughts on “How do interest rates affect savers and saving levels?”