Japan has traditionally had a high savings ratio, but, in past decade the savings ratio has fallen to be close to European / US levels.

Since 1998, though Japanese saving rates have declined. 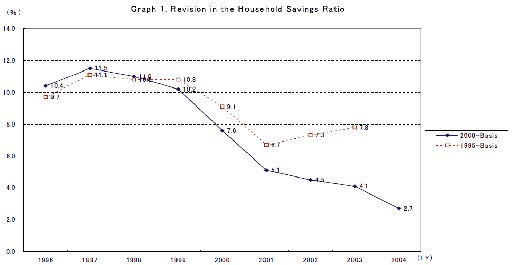 Currently saving rates in Japan are just under 3%.

Why Has Japanese Saving Rates fallen?

For more detail and explanation see this pdf and pdf2

Predicted Japanese household saving as a percentage of GDP. Source: Hoshi and Ito (2012).

The bad news is that with an ageing population, the saving rate is forecast to decline further.

Even though saving rates in Japan have fallen. Consumer spending still accounts for a low % of GDP compared to other countries. In 2005, consumption accounted for 55% of GDP – compared to 66% in the UK

During the early 2000s, Japanese consumer spending was struggling to remain positive.