Sustainable economic growth implies that the growth rate can be maintained over the long term. Sustainable growth involves both 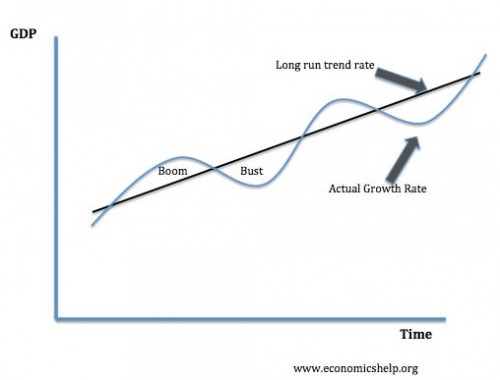 If economic growth is above the long-run trend rate of growth then the economy will tend to experience inflationary pressures. This is because aggregate demand is rising faster than aggregate supply. It will also lead to a deterioration in the current account balance of payments. Domestic firms cannot meet domestic demand, so consumers switch to imports.

This kind of inflationary growth tends to be unsustainable. If long run productive capacity is increasing at 2.5%, but demand is growing at 5%, there is excess demand in the economy. In the short-term firms can pay workers to do overtime, but the boom in demand cannot be maintained in the long term and after a ‘boom’ the economy often falls into recession. 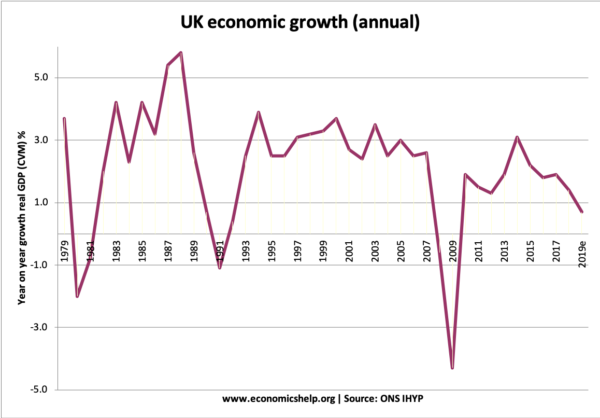 In the late 1980s, the UK economy experienced an economic boom with a growth rate of over 4% a year. However, this led to inflation and a large current account deficit. With inflation creeping up to 10%, the government increased interest rates and the boom turned into a deep recession.

From 1993 to 2007, the UK enjoyed a long period of uninterrupted economic growth with 15 years of positive economic growth. During this period inflation remained low and the growth rate was close to the long-run trend rate. This period could be seen to be sustainable. Though there was also a boom in bank lending and house prices which caused problems during credit crunch.

Regulations. Rather than leave it to market forces, or even tax/subsidy, a government could ban practises that damage environmental sustainability. For example, banning pesticides that harm bees and banning chemicals which damage the water supply.