Collusion involves firms coming to an agreement to artificially raise prices and increase profitability at the expense of consumers. Collusion can lead to significant welfare loss and governments have sought to prevent it through a variety of policies, including: 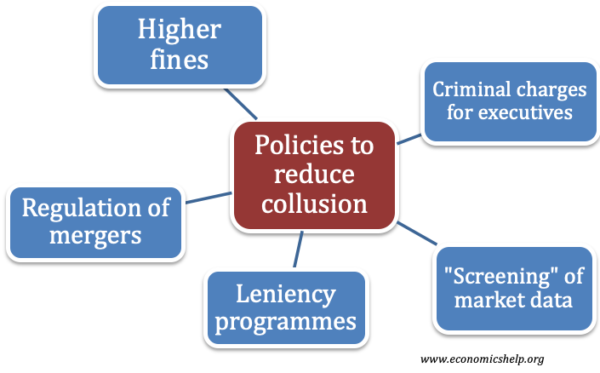 1. Detection through leniency programmes. To prevent collusion, governments first have to detect it. In a paper “Cartels as Rational Business Strategy: Crime Pays”(2011)  by Connor and Lande, they argue the chance of a cartel being detected is as low as one in five. This is because if firms are careful, they can collude without leaving any evidence.

In the US, the Department of Justice has investigative powers and in the EU it is the EU Commission. Mostly the commissions rely on tip-offs. One way to detect collusion is to give firms a strong incentive to give information to the government. The US brought in a law that the first firm who gives information on a cartel are immune from criminal charges and penalties. The 2nd and 3rd firm who co-operate do not get immunity but significantly lower sentences. The strength of this policy is that it creates uncertainty amongst colluders because – if in doubt – it makes sense to confess early and avoid charges.

2. Higher fines. The European cement industry was investigated for collusion. The Economist notes a report from the investigation that an executive said “… it’s hard to stop fixing prices when it’s still so worthwhile.” In “Cartels as Rational Business Strategy: Crime Pays” (2011) the authors claim that sanctions for collusion only accounts for a small percentage of the extra profits gained from collusion. They estimate the penalty for collusion is only 9% to 21% as the rewards from collusion. Therefore, there is a clear financial incentive for firms to collude. A firm weighs up the

“collusion remains a rational business strategy. Cartelization is a crime that on average pays. In fact, it pays very well.” – Connor and Lande, 2012.

In this case, higher fines would make collusion less rational. Combined with leniency programmes, it increases the incentive to be a whistleblower and avoid the heavy fines. The higher fines would also compensate consumers for loss of economic welfare from the period of collusion.

However, some firms have argued that fines from collusion are excessive and could in some cases bankrupt firms causing a decline in competition.

An example of major fines was in 2012 – major tv producers were given record fines for collusion in the provision of cathode-ray tubes causing the price of tv sets to rise. The European Commission (EC) passed a total of fines worth €1.4bn (£1.1bn) to several firms including Philips, Samsung, SDI, LG, Panasonic and Toshiba. Phillips said it would challenge what is considered a disproportionate and unjustified penalty. (Link)

In addition to government fines, the increased threat of civil litigation creates another financial cost of collusion.

3. Hold executives personally responsible. The US leads the way for holding executives personally responsible for engaging in illegal collusion. The personal threat of jail and a criminal record is much greater than the personal rewards of increasing firms profits. Given even a small risk of getting sent to jail, it is a large disincentive to take the risk of collusion. In the UK an executive can face up to five years in jail for cartel activity (though it is rarely imposed) After the LIBOR price-fixing cartel was exposed, major banks were fined large sums (Barclays fined £200m by CFTC,  $160 million by the US D of J and £59.5 million by the FSA.  Four former Barclays bank employees were sentenced to a total of 17 years. (SFO)

4. Screening of suspicious pricing behaviour. Modern technology enables governments to monitor suspicious pricing patterns which may indicate collusion and further investigation. This may need to be combined with information on profitability. For example, it can become hard to distinguish between normal price changes (e.g. airlines adjusting prices depending on demand) to formal collusion. Suspicious pricing behaviour was significant in the Libor scandal when it was shown banks were falsely inflating their rates to profit from trades.

This financial screening has become more viable with improvements in technology and AI logarithms. However, it works best in industries with substantial data. It also has limitations – firms could manipulate data. More worryingly it can easily lead to false positives. The US Department of Justice tried “screeing: but had to ditch it after too many false positives were created.

5. Increasing the enforcement budget. In 2012, the Department of Justice gained in revenue from fines 16 times more than the cost of running it. A bigger budget would enable more scrutiny and discourage collusion.

6. Regulation of mergers. Collusion is more likely in certain markets with similar products, easy to check prices, barriers to entry and often low-visible components (rather than retail end products) In these industries vulnerable to collusion, mergers must be closely monitored and blocking any merger which leads to significant fall in competition. In extreme cases, governments could consider splitting up powerful monopolies to try and increase competition.