No. It doesn’t always cause a fall in house prices. But, looking at historical data, when there is a sustained and significant rise in interest rates, it is very likely house prices will fall.  For example, the 1981 and 1991 house price crashes were both preceded by significant interest rate increases.

Why higher interest rates cause fall in house prices

If interest rates rise, ceteris paribus, we would expect to see lower demand for buying a house, and house prices will fall. In particular, when interest rates are very low, it encourages buy to let investors to purchase houses and rent out their property. At a low-interest rate, the cost of mortgage payments on the house is less than rental income. Therefore, there is a strong incentive for investors to buy housing. However, as interest rates rise, this incentive starts to change, and there comes a tipping point where the monthly mortgage repayments are higher than rental income. As this point is reached, there is a strong incentive for buy to let investors to sell, and this forces house prices down – creating a negative spiral in confidence.

A more typical homeowner will be somewhat less sensitive to interest rates. However, if interest rates rise to very high levels, they may be forced to sell because they cannot meet their mortgage repayments. For example, in 1992, with interest rates in the UK increased to 15%, there was a large rise in mortgage defaults and many sold their houses – as they had no choice. Also, in a period of high-interest rates, young people may prefer to keep renting, rather than take on an expensive mortgage.

It is worth pointing out, that there is often a delay of up to 18 months between an interest rate change and the effect on house prices. It takes time for homeowners to adjust to interest rate changes and decide what to do with the house. Some may have fixed deal mortgage and not notice for a while

When there is a sharp rise in interest rates, we do see falls in house prices. The most notable occurrences are

It should be noted that in both 1981 and 1991/92, as well as interest rate increases there was a serious recession – with rising unemployment and falling real incomes. Therefore, homeowners had twin threats of high interest rates and

How house prices can rise despite rising interest rates

Interest rates are not the only factor affecting house prices. Other factors include

For example, between 1993 and 1998, there is a modest increase in interest rates from 5.125% to 7.5%, yet this was a period of rapid growth in real house prices. This was because there was strong economic growth, and renewed consumer confidence. House price to earnings ratios were cheap after the 1991/92 house price crash. Banks gained renewed confidence to lend to people. 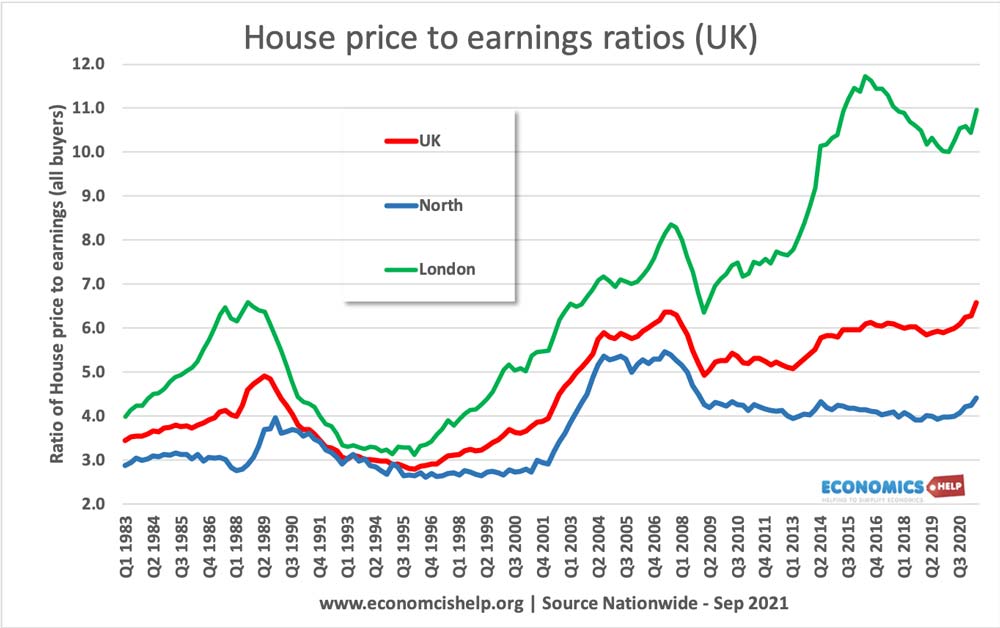 In 1993, house price to earnings ratios were close to 3 – making them cheap. Therefore, despite a modest increase in interest rates, house prices were still affordable by historical standards.

The UK housing market has become used to ultra low-interest rates. Therefore, many homeowners and buy to let investors may struggle if interest rates rise even modestly. The housing market has been a good target for investment because, in a zero interest rate world, there is little incentive to keep money in a bank when you could buy a house and make a good rental income. Furthermore, house price to earnings ratios are close to record highs. Combined with a cost of living crisis, a modest increase in mortgage payments could make many homeowners struggle to pay.