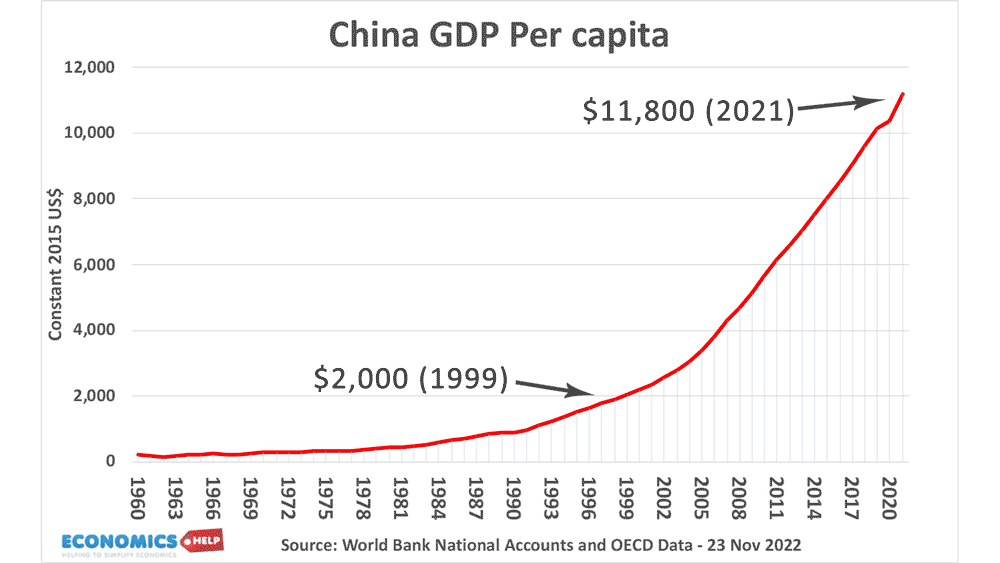 In the past few decades, the Chinese economy has grown at a breakneck speed, allowing living standards to soar with GDP per person growing 500% in the past 21 years.

China has become a major force in the global economy with an estimated 20% of global GDP by 2027. Yet, the seemingly unstoppable rise of Chinese economic growth has been hit by three dangers – a bust in the property market, innumerable covid lockdowns and a change in demographics, which will reduce long-term productivity. We will look at the extent to which the Chinese economy is in crisis, why things went wrong, and whether some kind of economic collapse is possible.

When we think of the Chinese economy, we tend to think of manufacturing exports, and for good reason, buy any manufactured good, and there is a reasonable chance, somewhere it will say ‘made in China.’ 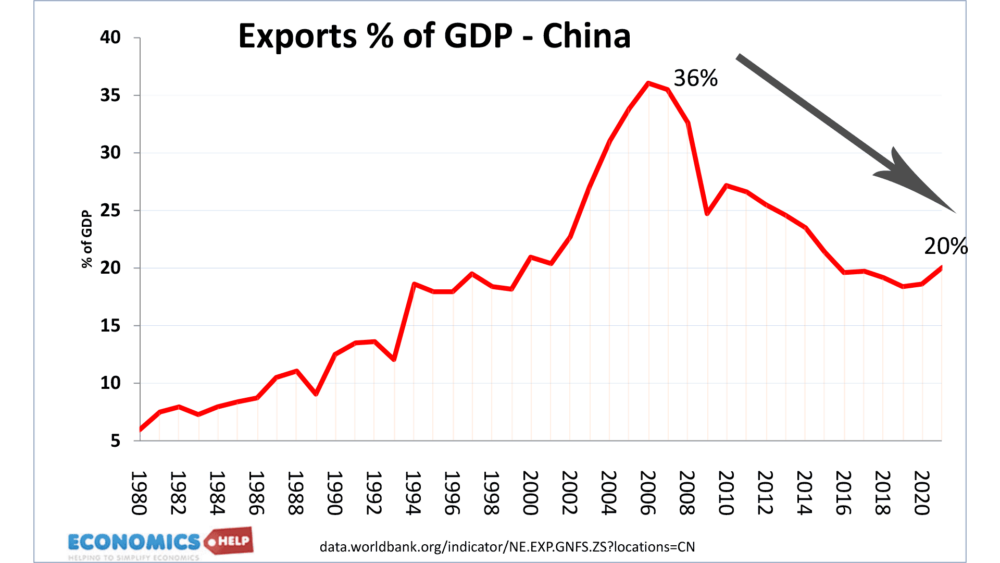 In the past decade, there has been a surge in prices, encouraging an investment boom. Rising prices have encouraged a speculative boom with people buying property for investment rather than living.

“According to a paper published last year by Wu Jing and Xu Mandi of Tsinghua University, between 2011 and 2015, China built roughly 18% more flats than it required to meet fundamental demand. (Economist)  And it did that even after demolishing over 7m old or decrepit homes a year.”

Seeking to cash in on rising prices, property developers have sought to build and sell as many houses as they can. It is estimated China built 18% more flats than required to meet fundamental demand. The property bubble caused property firms to become highly leveraged.  In particular, they sold houses well before they were finished. People desperate to buy paid up in advance, with many locked into paying mortgages without a house to live in.

The speculative fever has seen Chinese house prices become some of the highest price-to-earnings ratios in the world.

Beijing has 44 times the income, compared to 10 times in New York.

It is worth pointing out that developing economies do tend to have higher price-to-income ratios, for example, India and Cambodia have even higher ratios.

Nevertheless, in August 2020, the Chinese government sought to end this property speculation by placing three red lines on the ratio of debt to cash, equity and liquidity – with the aim of preventing speculation and making houses more affordable for people to live in. However, given the over-inflated market and reliance on highly leveraged loans, it immediately set off a ripple effect, with big property lenders and builders getting into shortages of liquidity.

The country’s biggest property developer, Evengraande announced last year it could no longer support $300bn of liabilities. In the absence of any effective government support, this led to many home buyers were left with outstanding mortgage balances, but no homes to live in. Homebuyers lost confidence and, unusually for a country which suppresses dissent, spontaneous mortgage boycotts started with buyers refusing to continue to pay for homes which were not finished. The slogan for non-payment of mortgages

This is different to the US housing crisis of 2008 – Americans couldn’t pay. Chinese could pay, but the developers can’t provide the finished house.

All, this started a liquidity squeeze, with property developers getting caught up in the loss of confidence and non-payment of mortgages. This caused potential buyers to become wary and property firms to cut back on investment. It has left innumerable housing projects in limbo with unfinished properties and consumers sold mortgages, but no home to live in.

The result has been a fall in prices and a fall in construction starts. Real estate accounts for 70% of personal wealth in China and understandably falling prices have caused a very sharp fall in consumer confidence and spending.

For a central government with so much political and economic clout, the response has been muted, pushing the responsibility onto local and regional governments, who are not able to give the finances and universal reassurance needed. Local governments have already been hit by Covid-lockdowns and the decline in their biggest form of revenue – which is land sales to property developers.

On top of mortgage turmoil, the policy of zero covid has led to disruptive lockdowns and uncertainty across the country. To ordinary people, the policy of harsh lockdowns seems arbitrary and very disruptive. A failure to vaccinate older people and a political attachment to zero-covid policy means that lockdowns continue today with case rates still rising. This has led to falling consumer confidence and consumer spending. Retail sales which grew at 10% plus in the years up to 2020, are now falling.

The economic uncertainty and slowdown in growth are causing a rise in unemployment. With up to 1 in 5 young people aged 16-25 unemployed. Official statistics paint a rosy picture of an economy close to full employment. However, these are somewhat misleading. Surveys show higher rates than officially registered unemployed. Also, unemployment figures only concentrate on urban areas. The real unemployment is in agricultural areas in the north.

Still, 23% of Chinese workers are employed in agriculture, despite it becoming a small sector of the economy. A key factor in past Chinese economic growth has been the ability of Chinese labourers to leave their low-productivity agricultural job and find higher-paying jobs in manufacturing. This is why China has needed such strong growth rates to absorb the surplus labour leaving agricultural areas. The slowdown in growth is a major cause of concern because it could lead to rising unemployment in a country with limited social security. 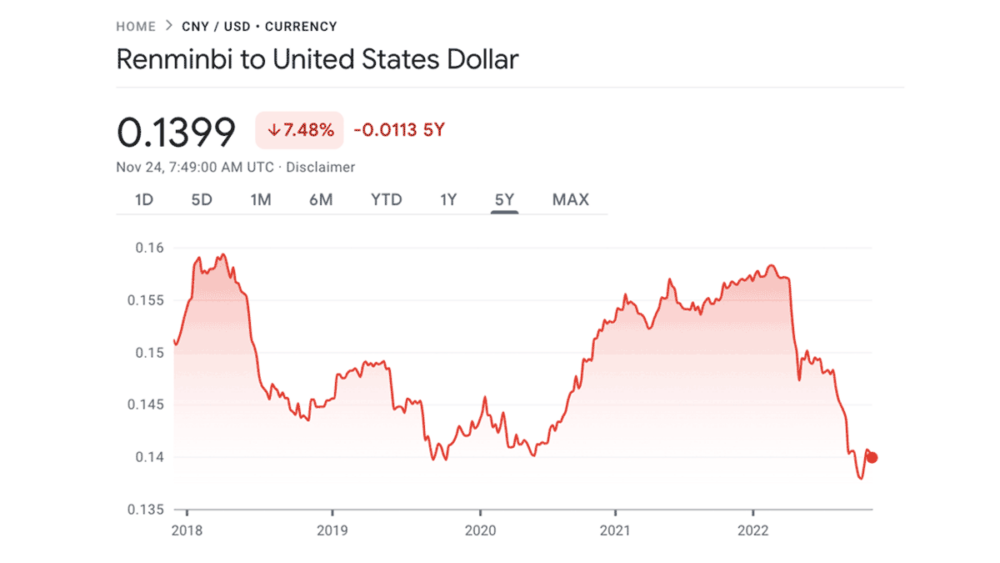 In response to financial turmoil and a slowdown in growth, the Chinese government have cut interest rates, in a bid to help homeowners and stimulate demand. This has led to a sharp depreciation in the Chinese currency in 2022. This depreciation helps exports become more competitive, but it is not the panacea for the Chinese economy it once was. Exports are less important as a share of GDP, and the fall in the currency may discourage foreign investment. Also, with global growth slowing down due to the energy shock, exports are lower than usual.

Also, it is worth pointing out, there is a concern about the validity of Chinese statistics. The FT point out this since 2012, the number of statistics has fallen from 80,000 to less than 10,000, and there is concern about their validity given official pressure to boost regional figures.  One economist. Luis Martinez, at the University of Chicago, suggests satellite imagery on light intensity shows that Chinese GDP growth may have been 33% overestimated in the past 20 years.

The increasingly autocratic nature of Xi Jinping is also unnerving investors. Since the invasion of Ukraine, the West has woken up to the downside of relying on imports from autocratic states with territorial ambitions. Both Trump and Biden have promoted restrictions on imports from China as the US seeks greater independence in semiconductors and battery technology. With Jinping often favouring Chinese state-owned firms, multinationals are thinking twice about investing in China and looking elsewhere in Asia, such as India

Another problem worth mentioning is the demographic crunch soon to hit China. Its successful one-child family became too successful with birth rates falling to 1.6 and the population now ageing rapidly. Over the next 20 years, the median age in China will rise from 35 to 50.  Its status as the most populous country will soon be eclipsed by neighbour India.

It is worth pointing out the Chinese demographic crunch is very similar to other western economies, such as Italy and Japan.

Given all this bad news, I have seen some videos talking about a Chinese economic collapse, but this is either misplaced wishful thinking or typical youtube clickbait. The truth is there is no chance of a Chinese economic collapse. It has too many assets, household savings, foreign exchange reserves and a strong manufacturing base. The property market is undergoing a major crisis, which may well get worse, but it will not completely undermine the whole economy. Even the credit crunch which decimated the US housing market and banks only caused a year-long recession in the US.

Also, it is not all doom and gloom for China. One area where China is a world leader in developing and building a greener economy. China will account for 40% of the growth in renewable energy. 10% of new car sales are electric and it is building huge capacities of wind and solar energy to fund its growing need for electricity.

Also to put the crisis in perspective, this is  UK GDP with all the economic and financial crises labelled. The point is you can have a serious economic crisis, but it doesn’t mean a collapse of the economy. Even a very severe recession in China would only slow down the long-run trend of growth 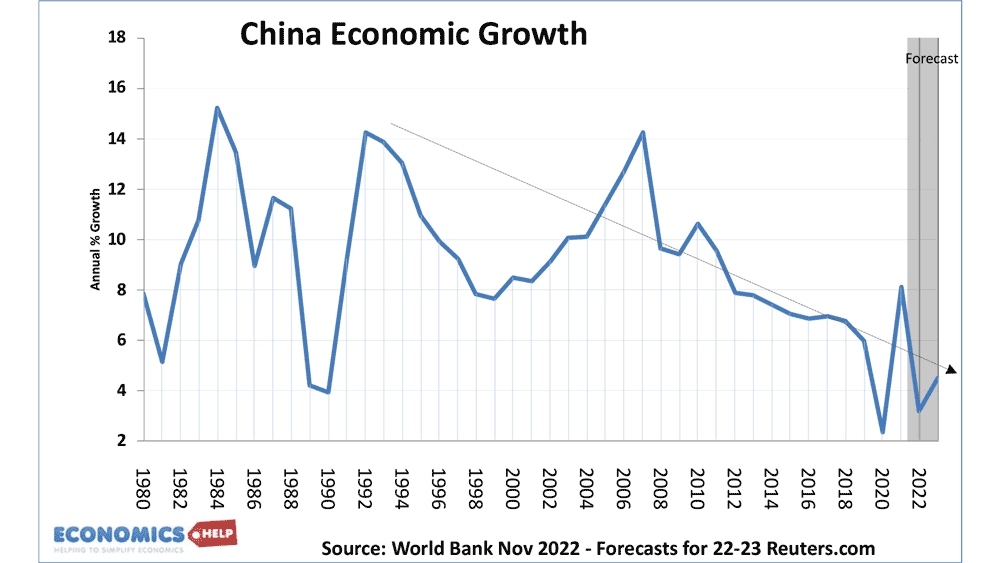 And Despite all these downward pressures on Chinese growth, it is still expected to grow next year with forecasts ranging from 2-4%. Whilst we talk of the Chinese economic crisis, the OECD claim that it is Chinese and Indian growth that may save the world economy from slipping into recession.

However, what is true is that the very high growth rates of the past are over. Slowing productivity and demographic changes will inevitably lower growth rates. Also, the reliance on the property market as a driver of growth is over. China will need to look elsewhere to green technology and manufacturing as a source of future growth.